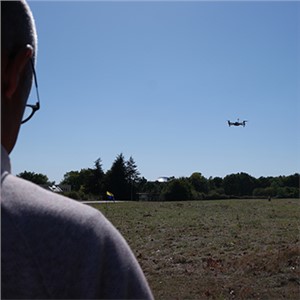 The contract is for three years and has a Total Contract Value (TCV) of AU$1.01m and Annual Recurring Revenue (ARR) of AU$336k (billed monthly). Services are for the King of the Hills Mine (KOTH) and Darlot Mine

The contract is subject to a termination clause of 90 days’ notice plus an early termination exit fee equivalent in value to 3 months of contract fees.

Red 5 Limited is an Australian gold producer with established mines located in the Eastern Goldfields of Western Australia. The Company is listed on the Australian Securities Exchange (Ticker: RED). Red 5 owns and operates the King of the Hills (KOTH) Gold Project, located approximately 900 kilometers north-east of Perth in the Leonora-Leinster mineral province of Western Australia. Red 5 also owns and operates the Darlot Gold Mine located approximately 100 kilometers north of KOTH.

DLT CEO Christopher Clark said: “We are pleased to be officially working with Red 5 and to provide frequent aerial surveying support which can be delivered efficiently and effectively to the business across a number of areas including for open pit mining, stockpile, processing area and for environmental purposes.”

Christian Viguié, CEO of Delta Drone SA said: “This first major contract signed in Australia validates the success of our implementation and our ability to duplicate the model that made Rocketmine successful in Southern Africa. It contributes to a good commercial dynamic for the entire Group. In France, several missions in the field of security have recently been successfully carried out, with the implementation of wired ISS Spotter systems on the occasion of events with very high notoriety (La Ferté-Alais air show, Roland-Garros Tournament). At the recent Cannes Film Festival, a wired ISS Spotter system was positioned as a recourse in case of requisition by the police. »