D-Orbit Enters Agreement with Beyond Gravity for the Supply 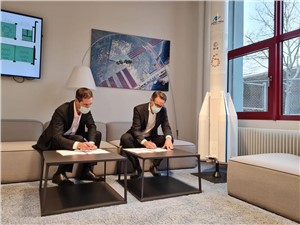 D-Orbit, the space logistics and orbital transportation company, today announced the signing of a subcontract with space company Beyond Gravity, under which D-Orbit will deliver lightweight carbon fiber-reinforced polymer (CFRP) tools and metallic structural components for the European Space Agency’s Space Rider reusable space vehicle. The financial terms of the transaction were not disclosed.

D-Orbit was selected for its experience and established know-how in space projects. It will supply the CFRP tooling and metallic structural flight hardware components. D-Orbit will also coordinate and monitor the work of Italian suppliers, to ensure that the production and documentation follows the space industry’s best practices.

“Beyond Gravity is one of the leading European companies in satellite structures, and their decision to partner with us is an exciting milestone for D-Orbit,” said Renato Panesi, Ph.D., D-Orbit’s Chief Commercial Officer. “We believe this kind of project, featuring collaboration between traditional and New Space companies, is essential for the future of the new space economy. We look forward to working closely with the Beyond Gravity team.”

“As a leading supplier of products for the space industry, it is important for us to keep our finger on the pulse and continue to offer the best solutions for tomorrow's market, also thanks to partnerships with innovative and reliable players such as D-Orbit," says Eric Wiesmann, Director Subsystems, Thermal and Structures at Beyond Gravity Space.

The Space Rider spacecraft, which will be built by prime contractor Thales Alenia Space, is an automatic, uncrewed laboratory designed to perform technology demonstration and pharmaceutics, biomedicine, biology, and physical science experiments over missions lasting up to two months. A key feature of Space Rider is the ability to re-enter the atmosphere to return experiment results, land on a runway, and fly multiple times, a mission profile that will validate Europe’s know-how in operating missions in low Earth orbit. Space Rider’s maiden mission is expected to launch in 2023.

About D-Orbit and Its Proposed Business Combination with Breeze Holdings
D-Orbit is a market leader in the space logistics and transportation services industry with a track record of space-proven technologies and successful missions.

Founded in 2011, before the dawn of the New Space market, D-Orbit is the first company addressing the logistics needs of the space market. ION Satellite Carrier, for example, is a space vehicle that can transport satellites in orbit and release them individually into distinct orbital slots, reducing the time from launch to operations by up to 85% and the launch costs of an entire satellite constellation by up to 40%. ION can also accommodate multiple third-party payloads like innovative technologies developed by startups, experiments from research entities, and instruments from traditional space companies requiring a test in orbit.

D-Orbit is a space infrastructure pioneer with offices in Italy, Portugal, the UK, and the US; its commitment to pursuing business models that are profitable, friendly for the environment, and socially beneficial, led to D-Orbit S.p.A. becoming the first certified B-Corp space company in the world.

As previously announced on January 27, 2022, D-Orbit has entered into a business combination agreement among Breeze Holdings Acquisition Corp. (“Breeze Holdings”) (NASDAQ: BREZ), a publicly traded special purpose acquisition company, D-Orbit and a newly formed joint stock company (société anonyme) governed by the laws of the Grand Duchy of Luxembourg (“Holdco”) pursuant to which Holdco will become the publicly traded parent company of Breeze Holdings and D-Orbit upon the closing of the transactions. The transaction is expected to close in the third quarter of 2022, subject to the satisfaction of customary closing conditions, including certain governmental approvals and the approval of the shareholders of Breeze Holdings and the contribution of the D-Orbit shares by the D-Orbit shareholders.

Tell a friend:
D-Orbit Enters Agreement with Beyond Gravity for the Supply of Space Rider Structural Components