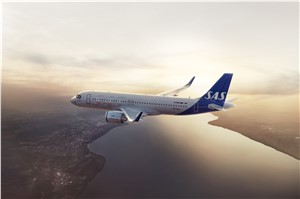 RPFH agreements are part of CFM's portfolio of flexible aftermarket support offerings.  Throughout the term of the agreement, CFM will guarantee maintenance costs for the airlines 160 LEAP-1A engines on a dollar per engine flight hour basis.

SAS currently operates 44 A320neo aircraft and one A321neo LR powered by the fuel-efficient LEAP engine and plans to introduce two additional A321neo LR as part of its strategy to develop International routes, including to the U.S.
sas-scandinavian_airlines_-_a320neo-5.jpg
SAS

"The new LEAP engines and long-term services agreement are an integral part of SAS' strategic fleet upgrade and will continue to greatly improve the efficiency in our operations. Our goal is to be industry leaders in sustainable aviation, and we are to reduce emissions with 25 percent by 2025, in comparison to 2005. This will mainly be enabled by using state of the art technologies allowing for lower fuel consumption and an increase in use of sustainable aviation fuels", says Magnus Örnberg, Executive Vice President and CFO, SAS.

This order is part of the airline's fleet upgrade program that aims to improve efficiency and sustainability performance. As a major European airline, SAS has been at the forefront of introducing technologies that reduce the impact of aviation on the environment, as well as choosing efficient engines to power its fleet.  In October 2020, the delivery flight for SAS' first LEAP-powered Airbus A321LR used a 10 percent sustainable jet fuel blend. The initiative is part of SAS' commitment to reducing its carbon footprint.

"We are delighted to expand our long-term relationship with SAS, an airline with which we share the same core values, said Gaël Meheust, president and CEO of CFM International. "Over four decades, CFM has developed leading-edge technologies that help our airlines customers make their operations both cost-efficient and sustainable.  We take SAS' trust as a great responsibility to keep supporting their operations with the high-level CFM standards in terms of reliability and utilization."