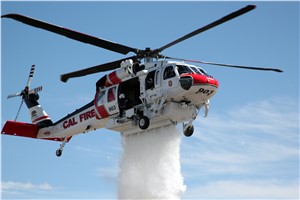 Configured by United Rotorcraft with a newly designed 1,000-gallon water tank attached to the belly of the aircraft; an extended landing gear to accommodate the tank; a retractable snorkel that can refill the tank in less than one minute; and a rescue hoist, the Firehawk helicopters will allow fire crews to attack wildfires, transport up to 12 ground firefighters to the fire line, and rescue firefighters and civilians when in need.

“We thank CAL FIRE, the County of Los Angeles and the City of San Diego for their trust in the combined efforts of Sikorsky and United Rotorcraft to bring a life-saving aerial firefighting helicopter to the urban centers and forests of California,” said Jason Lambert, vice president of Sikorsky Global Military & Mission Systems. “Their fire fighters now have a powerful and proven helicopter that can attack fires at night, in strong Santa Ana winds, maneuver with agility and safety in canyons and terrain from sea level up to 10,000 ft. altitude, while dropping water with tremendous precision and force.”

CAL FIRE’s newly acquired S-70i FIREHAWK helicopter is the first of nine aircraft currently on order, with an option for three more. CAL FIRE and San Diego are both first-time operators of the aerial firefighting helicopter.

LACoFD has operated three S-70A model Firehawks since 2001. During the ensuing 19 years, the county has pioneered and perfected the tactics needed to suffocate wildfires in their early stage when a fire is most vulnerable, while working in close coordination with other aircraft and with firefighting crews on the ground. The county’s new S-70i FIREHAWK aircraft is the first of two — more powerful and faster than the S-70A model — that LACoFD is adding to its fleet.

“With the increase in wildfire danger, the FIREHAWK has never been more relevant to the State of California,” said Mike Slattery, president of United Rotorcraft. “This capability brings unmatched multi-mission capability to these firefighting agencies to protect lives and property.”

United Rotorcraft contracted with KAWAK Aviation Technologies (Bend, Oregon) to design and manufacture the water tank to new specifications based on input from LACoFD. Among other equipment on each aircraft are a 600 lb. external rescue hoist, a 9,000 lb. cargo hook with load cell system, forward recognition lights and a high intensity searchlight. Avionics installations include tactical communications and navigation systems.

A Firehawk begins life at Stratford-Connecticut-based Sikorsky as an S-70i Black Hawk helicopter. United Rotorcraft then converts the twin-engine aircraft to its aerial firefighting configuration. The aircraft retains its multi-mission capability, allowing aircrew to perform search and rescue missions, medical evacuation, and carry cargo either internally or as an external load.