Climb Aboard This Master Of War Machines 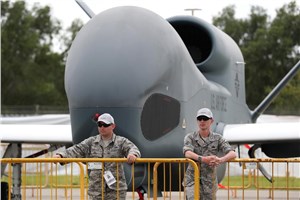 But it’s not just Northrop. In reality, aerospace and defense stocks are in the midst of a secular correction. It happens.

Long-term investors should take advantage of this opportunity. If history is any indication, this stock’s return to earth will not last.

The weakness in defense stocks is odd. Military budgets are rising. Even NASA is relevant again. Yet, most issues crested in February, and have been in slow, painful retreat since then. Northrop shares traded as high as $356. On Thursday, the stock closed at $295.

The only real change in the business: Wesley Bush, the chief executive officer, is stepping down.

To be fair, Bush has been a heck of a leader. He came to the firm in 2002 after TRW Aeronautical Systems, an engineering firm where he had been president, was acquired by Northrop. A year later, the bright West Virginian was chief financial officer. By 2010, he was chief executive.

Immediately he moved the company headquarters from California to Virginia. To grow the business, Bush knew Northrop had to compete more aggressively with its rivals on their home field. So Northrop located closer to the Pentagon.

Since then shareholders have had a magnificent run. When Bush took the helm in 2010, Northrop shares were $55.

Although he will officially step down in January 2019, the company is stronger, more diversified and in a better position than ever to capitalize on the current climate.

In 2017, the Senate backed a $700 billion military spending increase, $60 billion more than the plan President Trump proposed in March.

September of that year, Northrup announced it would spend $7.8 billion to buy Orbital ATK, a maker of rockets, composites and munitions. The combination pushed overall sales to $30 billion, and provided the technology to compete with Boeing for the next ground-based missile intercept system contract. That project could be worth $85 billion.

In May 2018, the U.S. Air Force decided to sole-source the development of next generation missile defense satellites. The winners were Northrop Grumman and Lockheed Martin.

Meanwhile, NASA is busy making plans for Mars 2020. Space News reports the original estimate for the project was $1.5 billion. By 2016, the cost had ballooned to $2.1 billion, plus $300 million for mission operations.

Bush will be succeeded by Kathy Warden, a current division president and chief operating officer. Like Bush, she was a transplant at Northrop, arriving from General Dynamics in 2008. In only a decade, she has risen to the top job.

Warden is taking over a great business.

Northrop trades at 24.5 times trailing earnings, and the market capitalization is only $51.4 billion. Its chief competitors Lockheed, Boeing and General Dynamics  are all larger. Boeing has a market cap of $207 billion.

Defense stocks have been rising in a strong secular trend for the past decade. Companies survived austerity during the Obama years through aggressive cost-cutting and mergers. They learned how to do more with less.

Now the purse strings have been loosened. This is not the end of the bigger trend. It is a correction. The weakness is an opportunity.

Tell a friend:
Climb Aboard This Master Of War Machines