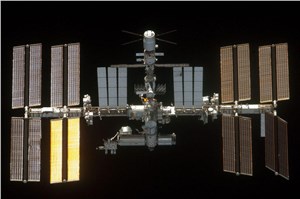 Elon Musk's Space Exploration Technologies Corporation -- SpaceX -- has disrupted the launch services market by offering prices below what anybody previously thought possible. But that isn't all it has done. Musk's enterprise has scored a number of technological firsts, convincing many that the commercial space sector is a viable business proposition rather than just a playground for billionaires like Jeff Bezos and Richard Branson.

However, as everybody by now knows, Musk's imagination sometimes gets the better of him and he embraces ideas beyond his reach. A case in point was his commitment to building space capsules for transporting astronauts to the International Space Station that could be reused over and over again, in much the same way SpaceX reuses the first-stage boosters on its Falcon 9 rockets.

Musk didn't stop there. In a 2014 statement he predicted that the Crew Dragon, as the capsule is called, would be capable of "propulsive landing with precision" -- meaning it could make a powered touchdown at some pre-chosen place on land, rather than splashing down in the ocean. The unmanned supply spacecraft on which Crew Dragon is based are designed to splash down in the sea as a way of cushioning their landing, but Musk thought SpaceX could do even better than the Space Shuttle in returning from orbit to dry land.

Boeing, the other company that NASA selected to carry astronauts to the space station, said it could do the same thing. Boeing, a contributor to my think tank, is still on a vector to return its astronaut capsules to dry land, and then reuse them up to ten times. Over the last several months, though, and with little fanfare, SpaceX has backed away from both goals. It now says Crew Dragon, like the its cargo capsule, will land in the ocean, and therefore can only be used once to transport a crew.

It can still be re-used for carrying cargo to low-earth orbit. Nonetheless, SpaceX's quiet abandonment of what had been key selling points for Crew Dragon is a significant setback for SpaceX. It means Boeing will be the only company building a reusable space capsule for astronauts, and its spacecraft -- called Starliner - will be the only one that touches down on land. That seems to be a reversal of fortunes for Musk, who once criticized the Boeing concept as backward-looking. Now it is the SpaceX approach that looks less than revolutionary.

This isn't the first time Boeing has built a reusable means of getting astronauts into orbit. It legacy Rockwell unit built the Space Shuttle. When NASA decided to turn to commercial companies for transport of cargo and crews to the space station, it gave competitors the option of developing reusable capsules for astronauts. But what SpaceX has learned conducting unmanned cargo missions into low-earth orbit is that it takes a long time to refurbish spacecraft once they have been immersed in salt water. Maybe up to a year. And it's expensive.

So once it gave up on the goal of building an astronaut capsule that could precisely touch down on land, the plan for reusability began to look unattainable. Boeing thus will retain its title as the only company that has ever built reusable spacecraft designed to carry astronauts. This presumably will reduce the cost of keeping the International Space Station manned with scientists who can conduct research only feasible in a weightless environment.

The space station has actually been inhabited continuously since 2000, but once the Space Shuttle retired the only way to get astronauts there was on Russian rockets. NASA's Commercial Crew Transportation program was conceived to restore America's ability to lift astronauts into low-earth orbit. Boeing's Starliner will ride on an Atlas V rocket made by United Launch Alliance. Atlas V has never failed in over 70 launches. SpaceX's Crew Dragon will ride on the company's Falcon 9 rocket, which has a less stellar track record.

NASA turned to commercial companies so that it could focus its own human spaceflight efforts on deep space missions to the Moon and Mars. The assumption was that commercial sources were sufficiently advanced to service the space station safely and cost-effectively. However doubts have been raised about SpaceX plans to fuel its rockets while astronauts are on-board, and other concerns are delaying certification of commercially built astronaut capsules.

One issue that cropped up recently was the absence of an experienced astronaut at SpaceX. Astronaut Garrett Reisman, who flew on the shuttle, left the company earlier this year. That leaves Boeing as the only company with an experienced in-house astronaut -- Chris Ferguson, who is training with NASA crew members to fly on the first Starliner mission.

Time will tell what difference that might make for the certification of each company's spacecraft. Neither spacecraft has flown yet.