What U.S. Air Force Modernization Would Look Like Without Space 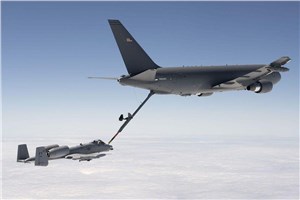 It is possible that when Congress hears the details of President Trump's proposed "Space Force," it will rebel against the cost and complexity. Without enabling legislation, a sixth service branch can't happen.

But Congress might embrace the idea. Space capabilities are essential to U.S. military operations; they are also central to our evolving commerce and culture. So creating a separate military service to assure they are managed effectively isn't an outlandish idea. A bit premature perhaps, but not crazy.

If it happened, though, what would that mean for the Air Force -- particularly for its plans to invest in new technology? The technological landscape is changing rapidly, and much of what the Air Force thought it was going to be buying over the next decade was space-related.

That includes the ballistic missiles it manages in support of nuclear deterrence and the networks it relies on to conduct information-age warfare. All of that stuff would still be needed, but it might not be the responsibility of the Air Force anymore. The Air Force would be mainly about "things with wings."

So how would the Air Force adjust its modernization priorities to remain an equal participant in the joint force?

My guess is that it would move to buy many of the items in its remaining portfolio faster.

The reason is that with satellites and ballistic missiles gone, Air Force leaders will look around and realize they have been dragging their feet on buying new gear. If they don't speed up, the Space Force will make what's left of the Air Force look old-fashioned and marginally relevant.

Take, for example, the aerial refueling fleet. The Air Force has a new tanker, the KC-46 Pegasus, that is far superior to anything in its tired fleet of Cold War refuelers. Most of the tankers in the current fleet have been flying for over half a century, and nobody can say for sure how much longer they will be airworthy.

The handful of "newer" tankers in the fleet -- averaging over 30 years of age -- are militarized DC-10s that are expensive maintain, burn too much fuel getting where they need to be, and carry much more "gas" than can reasonably be transferred to other planes in a typical refueling scenario. Air Force leaders want to retire them.

So it isn't hard to make the case for Pegasus. It is needed to support warfighters in all of the U.S. military services, and in allied forces. But current modernization plans call for buying only 15 KC-46s per year. At that rate, it would take 30 years to replace the 479 aged tankers in the current fleet.

Without space, Air Force leaders will likely move to implement a more vigorous modernization strategy for tankers along the lines of what Senator John McCain proposed in January of last year -- buying about two dozen tankers per year. With the higher production rate, a majority of Cold War tankers could be replaced by 2030.

Fighters, which deliver air superiority, are another area where faster would be better for Air Force modernization if space migrates to a new service. The service warns in its Air Superiority 2030 Flight Plan that the Air Force's projected force structure 12 years from now "is not capable of fighting and winning" against threats expected in that timeframe.

The biggest reason why such pessimism might be justified is that it is buying the stealthy F-35 fighter at the rate of only about 50 per year. It's production objective is 1,763. Do the math, and it turns out that half the fighter force in 2030 consists of fighters developed in the 1970s.

If the Air Force were to double the rate of production for the F-35, 80% of the tactical aircraft in the 2030 fleet would be highly survivable fifth-generation fighters. The service would thus be much more capable of fighting and winning against a near-peer adversary, especially given the versatility of the F-35.

I don't want to discount the value of a sixth-generation fighter, which is being discussed under the rubric of "penetrating counterair," but that concept won't be any help in 2030 because it will barely have emerged from development. F-35 is the main option for securing air superiority circa 2030, but that requires speeding up the production rate.

One more example of why speeding up would make sense. The Air Force has recently killed a plan to recapitalize its J-Stars radar planes, which track and image moving ground targets. It says the existing fleet is too vulnerable, so it needs a different approach. Fair enough, but the different approach it has in mind won't debut until the 2040s.

If Air Force leaders stick with that schedule, they might as well turn over the ground-moving-target mission to the Space Force, because it will have solutions sooner. What the Air Force needs to do if it wants to sustain its role in such missions is accelerate work on systems like the RQ-4 Global Hawk drone, which holds the endurance record for air missions.

Long-endurance drones deliver major advantages over space systems in providing tactical reconnaissance and surveillance, because any satellite closer to Earth than 22,000 miles will be zooming across the sky at too fast a pace to maintain a lock on targets. Obviously, being in geostationary orbit 22,000 miles up makes it nearly impossible to detect fine details.

At the moment, the Air Force doesn't have anywhere near the number of high-flying, long-endurance drones it needs to take the place of J-Stars planes. So if it wants to avoid losing the J-Stars mission to overhead assets, it needs to speed up its efforts to implement a successor solution focusing on unmanned aircraft.

I can make much the same case for buying the new B-21 bomber, or the TX training aircraft. Today's Air Force is moving too slow on fielding every one of its next-generation aircraft, in part because it has been distracted by space and ballistic missiles and networks. If President Trump's Space Force becomes a reality, it will need to pick up the pace of what's left in its portfolio.

Tell a friend:
What U.S. Air Force Modernization Would Look Like Without Space