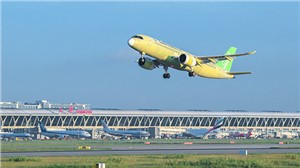 C919 AC104 took off from the fourth runway of Shanghai Pudong International Airport at 5:32 on August 1st, 2019, and landed at 6:57 after completing a number of test points and initial control inspections of various aircraft systems during a flight of 1 hour and 25 minutes, successfully completing its first flight test.

So far, Commercial Aircraft Corporation of China, Ltd. (COMAC) has put four aircraft into flight test, among which AC101, AC102 and AC103 have carried out flight test in Yanliang of Xi'an, Dongying of Shandong and Nanchang of Jiangxi, the static tests and other ground verification tests are in steady progress, and the development of C919 aircraft will enter the phase of high-density, high-difficulty and high-risk flight tests.