US $3Bn Military Package to Ukraine Looks to Change Battlefi 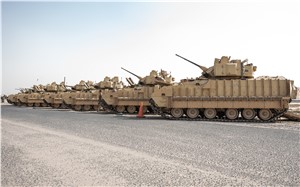 DOD officials unveiled the more than $3 billion package of military capabilities to help Ukraine drive the Russian invaders from their soil.

"The war in Ukraine is at a critical point right now, and we have to do everything we can to help the Ukrainians continue to resist Russian aggression," Laura Cooper, deputy assistant secretary of defense for Russia, Ukraine and Eurasia, said.

The presidential drawdown authority announced today is the largest the United States has committed to so far. The authorization of presidential drawdown of equipment from U.S. inventories is valued at up to $2.85 billion and there is an additional $225 million in foreign military financing to contribute to the long-term capacity and modernization of Ukraine's military, Cooper said.

The major announcement was the inclusion of 50 M2-A2 Bradley Fighting Vehicles for the Ukrainian military. These armored vehicles — enough to outfit a mechanized infantry battalion — will come with 500 tube-launched, optically sighted, wire-guided, or TOW, anti-tank missiles and 250,000 rounds of 25 mm ammunition.

Artillery remains a crucial capability for the Ukrainians and the PDA will provide 18 self-propelled 155 mm Paladin howitzers, 36 105 mm towed howitzers and thousands of rounds to supply both systems.

"These capabilities will complement and work with the expanded U.S.- led training beginning this month that will build Ukraine's capacity to conduct joint maneuver and combined operations," Cooper said. "We will ensure Ukraine has both the equipment and the skill necessary to sustain its efforts to push back on Russian aggression."

U.S. officials are always looking at what Ukraine needs to fight the Russian invaders. "Their battlefield needs have evolved over time," Cooper said.

Now Ukraine needs armored vehicles and Germany, France, the Netherlands and the United States are sending them to the besieged nation, Cooper said. "In the case of the Bradley, what you are seeing is a recognition that this is the right time for us to provide this armored capability," she said. "This is the right time for Ukraine to take advantage of its capabilities to change the dynamic on the battlefield."

Two briefers, one in uniform speak to reporters from lecterns with the pentagon logo, a tv monitor and American flag in the background.

Russian President Vladimir Putin "has not given up his aims of dominating Ukraine and continuing to acquire Ukraine's territory," Cooper said. But … "the Russian armed forces weaknesses have collided with those aims."

The aid to Ukraine is still important, the deputy assistant secretary said. "From an overall strategic perspective, it is hard to emphasize enough the devastating consequences if Putin were to be successful in achieving his objective of taking over Ukraine," she said. "This would rewrite international boundaries in a way that we have not seen since World War II. And our ability to reverse these gains and to support and stand by the sovereignty of a nation, is something that resonates not just in Europe, but all around the world.

"No one wants to send a signal to another bully around the world that they can take over their neighboring country without paying a steep, steep price," she continued.