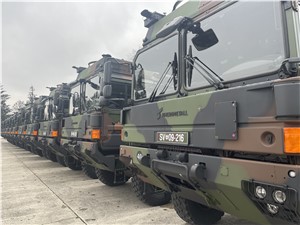 In a further multilateral exchange of equipment, or “Ringtausch”, Rheinmetall has provided Slovenia with military swap body truck at the behest of the German government. Forty newly build trucks, based on the UTF unprotected transport vehicles Rheinmetall produces for the Bundeswehr, have now been handed over to the Slovenian military in Ljubljana. For Rheinmetall, the transaction represents sales volume in the lower two-digit million-euro range.

In exchange for the new military trucks, the Slovenian armed forces furnished significant military aid to Ukraine several weeks ago. In addition to the vehicles, Slovenia is receiving variable loader platforms, five palletized water tank modules, as well as an initial service package, including training.

The project was completed at a remarkable pace. The equipment exchange was based on a declaration of intent made several weeks earlier on 21 September 2022 by German defence minister Christine Lambrecht and here Slovenian counterpart, Marjan Šarec, followed by an order placed with Rheinmetall on 5 December 2022. Negotiations between the the three parties – the German Ministry of Defence, the Slovenian armed forces and Rheinmetall – went quickly and smoothly.

In terms of configuration, these swap body trucks are comparable to the logistic vehicles developed by Rheinmetall MAN Military Vehicles on behalf of the Bundeswehr. Many of these protected and unprotected trucks are currently being produced under a framework agreement between Rheinmetall and the Koblenz-based Federal Office for Bundeswehr Equipment, Information Technology and In-Service Support (BAAINBw).

The “Ringtausch” is a procedure developed by the German government to support the Ukrainian war effort in cooperation with neighbouring European countries and NATO partner nations. Here, NATO countries transfer Soviet-era heavy equipment to Ukraine, receiving surplus Western-made systems in return. Rheinmetall is already taking part in multilateral equipment exchanges with the armed forces of the Czech Republic, Slovakia and Greece, supplying them with main battle tanks and infantry fighting vehicles.