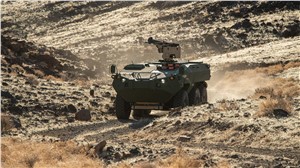 Created to serve as a Naval Sensor Node supporting expeditionary operations, the Cottonmouth vehicle provides lightweight multi-modal capability for the Marines, consistent with the service’s Force Design 2030 vision. A multi-domain command and control suite integrated into the vehicle as part of the C4UAS Mission Role Variant allows it to coordinate data and serve as the quarterback, or battlefield manager, for the modern battlefield. The amphibious 6x6 platform is equipped for sustained reconnaissance with organic unmanned systems capabilities and multi-spectrum sensors which provide seamless communication between the U.S. Navy and Marine Corps.

“Our Cottonmouth vehicle is a completely clean-sheet design that provides transformative reconnaissance capabilities and meets Marine Corps requirements,” said David Phillips, Senior Vice President, Land and Sea Systems. “The vehicle was designed from its inception by listening to customer requirements. Because of its smaller size, the Marines can quickly deploy next generational combat power to the fight and lets commanders meet any mission anywhere.”

The prototype is the second iteration of the vehicle informed by lessons learned from an original Alpha prototype vehicle and approximately 3,000 miles of testing. Textron Systems’ Cottonmouth vehicle has completed contractor verification testing of its mobility, swim capability, vetronics integration and C4UAS mission capabilities.  In addition to delivery of the fully integrated ARV platform, the company also delivered a blast hull to the Aberdeen Test Center and a systems integration lab (SIL) to the Naval Information Warfare Center-Atlantic, both of which have been undergoing government evaluation and testing. The prototype vehicle now enters its formal government evaluation phase, expected to last through 2023.