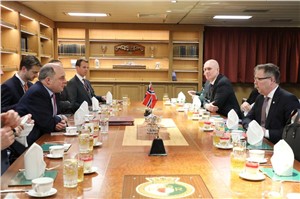 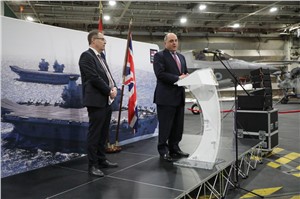 Royal Navy frigates and destroyers will get a significant boost to their long-range precision strike capabilities following a new partnership between the UK and key NATO and Joint Expeditionary Force (JEF) ally, Norway.

Strengthening defence ties between the UK and Norway, the Royal Navy will receive the Naval Strike Missile (NSM), outfitted on a total of eleven Type 23 frigates and Type 45 destroyers, in a collaboration with the Norwegian government.

Measuring nearly 4 metres long, the NSMs are a fifth-generation missile using integrated sensors and autonomous target recognition to precisely strike enemy ships and targets on land at distances of more than 100 nautical miles (115 miles) at high subsonic speeds. It can elude enemy radar and defence systems by flying at sea-skimming altitude and using evasive manoeuvres.

Defence Secretary Ben Wallace said:
"We have a long history of defence cooperation with Norway. This new agreement cements our partnership with one of our closest allies, whilst strengthening our Royal Navy with a new surface to surface strike capability."

Replacing the Harpoon surface-to-surface weapon, due to go out of service in 2023, the world-class anti-ship missile will be fitted to three vessels at pace and will be ready for operations onboard the first Royal Navy vessel in a little over 12 months. The collaboration will result in more ships equipped with the highly sophisticated naval strike missiles which in turn will contributes in enhancing the security in our common areas of interest.

NSM will enhance collaboration and interoperability with several of our key strategic partners. In the North Atlantic and Baltic Sea Region users, and soon to be users, include Norway, the US, Poland, Germany, and Canada. Both the US and Australia will operate NSM in the Pacific region.

Norwegian Minister of Defence Bjørn Arild Gram, said:
"This is a significant task with an ambitious timeline. Both nations have established a designated team with a strong mandate to ensure the success of this common effort. The Norwegian company Kongsberg Defence & Aerospace is supporting the joint team with their expertise and the planned integration on the UK vessels."

The meeting of Northern Group Defence Ministers on HMS Queen Elizabeth, will see discussions on the implications of Russia’s illegal invasion of Ukraine, security developments in Northern Europe, and Sweden and Finland’s NATO membership applications.