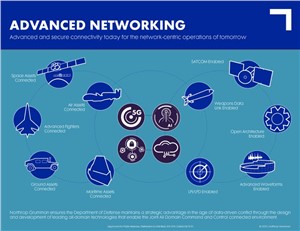 At Project Convergence 2022 (PC22), Northrop Grumman Corporation (NYSE: NOC) connected multi-service capabilities to enhance all-domain detection, tracking and engagement in the battlespace. With each successful experiment and rapid integration Northrop Grumman proved Joint All Domain Command and Control (JADC2) can be a reality, allowing the U.S. Joint Forces and Allies to act as one resilient force.

Northrop Grumman worked closely with the U.S. Army in successfully demonstrating the integration of network enabled offensive and defensive fires during the PC22 test and experimentation. The multiple successes at Project Convergence built on the company’s proven performance in connecting the battlespace across domains.

Another experiment demonstrated IBCS’ ability to integrate with a new interceptor uplink for communicating with a missile in flight, now adding another option where historically only the Patriot radar system was used. This new capacity provides the warfighter more flexibility in deploying sensors and effectors across the battlefield.

And in the desert of Arizona, at the Yuma Proving Ground, the FAAD C2 was able to show its battle-proven capabilities in a live fire exercise. FAAD C2 was used to track, clear airspace, and direct engagement to a lightweight Javelin command launch unit (CLU) firing Stinger missiles against air threats.

MTCCS III Corps provided the network connection from Fort Hood that enabled Project Convergence 22 and its simulations. It also provided technical support on simulations to the experiment participants, helping to strengthen the overall outcomes of the exercise.