Nexter and MBDA Present the New NARWHAL Turret Equipped With 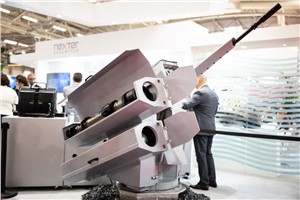 The NARWHAL is a remotely operated 20mm naval turret that can be integrated just as easily onto small patrol boats as onto frigates. Equipped with state-of-the-art optronics, including a day/night sight and a laser range finder, it is effective at more than 2,000 metres thanks to its 20M621 gun.

The NARWHAL is already a commercial success, in service with six different navies. To meet their needs and those of future customers, our engineers are working to add new capabilities and options that enhance its operational effectiveness.

The NARWHAL turret presented on the Nexter stand is paired with a manual target designator: the Short Range Pointer (SRP), designed by the German firm Hensoldt. With this easy-to-use tool, an onboard operator can quickly designate a target to the NARWHAL by pointing a laser beam.

The AKERON MP missile (formerly known as the MMP) has been available to French forces since 2017 and has already been selected by five countries, including three in Europe. It is the only latest-generation land combat missile in service to have been successfully engaged in operations on multiple occasions. With more than 150 test and training firings to its credit, the AKERON MP is capable of dealing with all battlefield threats in all types of environment: extreme heat and cold, urban spaces, maritime areas, and mountainous terrain. Finally, a naval capability is being implemented on the AKERON MP missile to facilitate the acquisition of small targets and signatures from naval platforms, including with a mast-mounted configuration, and provide these platforms with an enhanced self-defence capability in coastal environments against sea- or land-based asymmetric threats. AKERON MP offers both “fire-and-forget” and “man-in-the-loop” capability (for engagements where there is a risk of collateral damage).

The integration of MBDA’s anti-missile system on the NARWHAL turret means that the AKERON MP is now available on a new naval platform, as the system also comes in a dismounted version on a light firing post, as well as on a range of other platforms, such as armoured vehicles, light vehicles, ECUME semi-rigid commando boats, fast patrol boats, or larger ships for close protection needs.