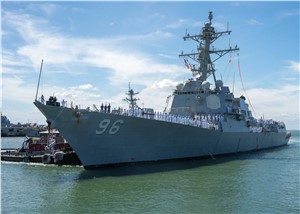 During the deployment, the ships supported dual and tri-carrier operations as well as participated in multiple bi-lateral and multi-lateral training opportunities with the Israeli, British, Italian, Hellenic, Spanish, and French navies, among others.

“I’m incredibly proud of how well the crew performed during our extended deployment to U.S. 6th Fleet,” said Cmdr. James Hagerty, Bainbridge’s commanding officer. “Their efforts greatly strengthened NATO at a critical time for the Alliance.”

While in U.S. 5th Fleet, Cole participated in multinational exercises to include the International Maritime Exercise/Cutlass Express 2022, the largest maritime exercise in the Middle East with over 60 partner nations and international organizations, and Exercise Intrinsic Defender with the Israeli Navy.

Cole also conducted a flag verification boarding of a stateless fishing vessel transiting the Gulf of Oman along a known smuggling route. U.S. forces discovered 40 tons of urea fertilizer, a chemical compound with agricultural applications that is also known to be used as an explosive precursor. The U.S. Navy later transferred the fertilizer and vessel to Yemeni Coast Guard officials.

“This crew is unlike any I've ever seen,” said Cmdr. Jim Welsch, Cole’s commanding officer. “They conducted events across every major mission area while operating in both 5th and 6th Fleet areas of operations, and the crew has delivered excellent results with every opportunity.  I know that our Sailors' families back home are proud of our Determined Warriors.”

The crew was then called back to U.S 6th Fleet area of operations where Cole re-joined the strike group and participated in numerous multinational surface, subsurface, air defense and maneuverability exercises with the Italian and French navies.

Both Cole and Bainbridge proved to be an integral part of the HSTCSG during every phase of deployment.

“Our goal at the beginning of this deployment was to demonstrate our commitment to NATO and defend U.S. and partner interests in the U.S. European Command area of responsibility,” said Guy. “Through our professionalism and relentless pursuit of improving integration and interoperability with NATO and partner forces, I believe we demonstrated just how combat capable our combined forces can be.”

The strike group also participated in a Cooperative Deployment with the Royal Norwegian Navy’s Fridtjof-Nansen class frigate HNoMS Fridtjof Nansen (F310), who returned home to Norway in May.