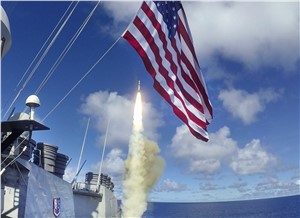 “Not only am I glad the [Commander, Task Force (CTF)] 71 team was the first to have a successful Missile Launch against a brand-new type of target drone, but I am extremely grateful that we got to do it side by side with our allies and partners in the region,” said Capt. Walter Mainor, commander, Task Force 71. “I’m proud of all of the participants who worked hard to make this happen, but I’m especially proud of the crews of USS Barry, USNS Alan Shepard, and our coalition partner HMAS Perth”.

The BQM-177A is an advanced high-subsonic, recoverable aerial target system that imitates advanced subsonic anti-ship cruise missile threats to test the effectiveness of shipboard air defense systems and is used for fleet training. It is unmatched in its performance capabilities when it comes to delivering realistic anti-ship missile threat emulation, according to program managers at Naval Air Systems Command.

“Our primary focus in the targets community is effective, affordable training and test for the U.S. Navy,” said Don Blottenberger, the Navy’s Aerial Targets program manager. “The efforts of the team, including partnership with MSC and the target operations organizations, represents the best of our community. The BQM-177, now fully capable, will provide quality service to our warfighters for decades to come.”

PV 22-1 is the fifth iteration of the quadrilateral exercise series between Australia, Japan, Republic of Korea, and U.S. Naval forces. This exercise is focused on improving the capabilities of the countries participating to respond together as a naval force against crises and contingencies in the region. The purpose is for the participating navies to continue to refine their skills operating as an integrated force ready to respond to a changing and complex maritime environment in the Indo-Pacific region.