Equal to the size of two houses and taking 45,000 hours, the first steel 'block' has been constructed by shipbuilders working on the Hunter Class Frigate Program 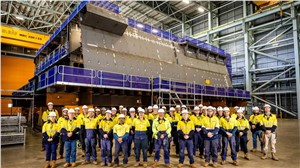 Shipbuilders are initially manufacturing prototype five prototype ship blocks to test and refine the processes, systems, tools, facilities and workforce skills ahead of construction of the first Hunter class frigate.

There are 22 blocks in each Hunter class frigate.

The first prototype block, known as Block 16, weighs more than 140 tonnes and its construction involved the expertise of 35 different trades, including engineers, boiler makers, welders, fabricators and project managers.

This first prototype block (without any Hunter class design changes) would form part of the middle of the ship where there are accommodation spaces.

Over the coming weeks and months, the Hunter program will continue constructing the second and third prototype blocks, each more complex than the last.

In mid-2023, the prototyping program will commence the production of additional blocks incorporating the Hunter class design changes, with these blocks actually being used in one of the first three ships.

“Throughout construction of the first prototype ship block, our highly-skilled workforce has been able to incorporate new, more efficient and effective ship-build methods and innovations into our processes.

“Already, the quality and productivity we are achieving is well above where we thought it would be at this stage of prototyping. This quality demonstrates the potential of a strong future for continuous naval shipbuilding in Australia.

“We are working towards achieving new benchmarks in manufacturing efficiency and quality and the new processes we are developing allow much greater engagement with Australian suppliers.”