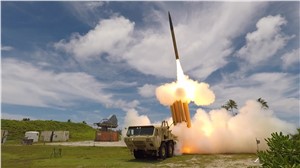 “Aerojet Rocketdyne is committed to meeting the nation’s critical defense needs to protect what we value most,” said Eileen P. Drake, Aerojet Rocketdyne CEO and president. “The on-time delivery of the 800th THAAD boost motor and DACS guidance system is a testament to our team’s focus on the mission, commitment to high quality and dedication to customer needs.”

The THAAD solid rocket boost motor is manufactured at Aerojet Rocketdyne’s Defense Headquarters in Huntsville, Alabama and at the company’s Solid Rocket Motor Center of Excellence in Camden, Arkansas. The DACS, a highly-responsive thruster system that keeps THAAD’s kinetic kill vehicle on target during the latter stages of an intercept, is manufactured in the company’s Los Angeles, California facility.

About Aerojet Rocketdyne: Aerojet Rocketdyne, a subsidiary of Aerojet Rocketdyne Holdings, Inc. (NYSE:AJRD), is a world-recognized aerospace and defense leader that provides propulsion systems and energetics to the space, missile defense and strategic systems, and tactical systems areas, in support of domestic and international customers. For more information, visit www.Rocket.com and www.AerojetRocketdyne.com . Follow Aerojet Rocketdyne and CEO Eileen Drake on Twitter at @AerojetRdyne and @DrakeEileen .