Austal USA awarded up to US$3.3Bn contract for 11 USCG Offsh

This news is classified in: Defense Contracts Homeland Security Navy 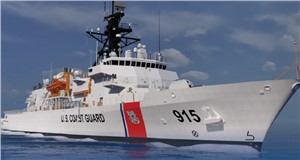 Austal Limited (ASX:ASB) is pleased to announce Austal USA has been awarded a contract with a potential value of US$3.3 billion (A$4.35 billion), for the detail design and construction of up to 11 Offshore Patrol Cutters (OPC) for the United States Coast Guard (USCG).

The first vessel has been contracted by the US Coast Guard, with options for a further 10 vessels.

Construction is expected to commence in 2023.

Construction of the 110-metre OPC’s will take place at Austal USA’s new US$100 million steel shipbuilding facility in Mobile, Alabama.

Although the OPC contract has been awarded in FY2023, the contract award will positively impact some cost assumptions used to calculate Austal’s FY2022 earnings before interest and tax (EBIT). Therefore, Austal expects its FY2022 EBIT will be higher than the previously forecast $107 million. The Company is not yet in a position to quantify the extent of the EBIT uplift and will inform shareholders as soon as the higher EBIT is calculated.

“The United States Coast Guard’s new Offshore Patrol Cutters are an outstanding opportunity for Austal USA to further demonstrate the shipyard’s new steel shipbuilding capability; based on years of proven construction experience through the delivery of the LCS and EPF programs for the United States Navy,” Mr Gregg said.

“The Offshore Patrol Cutters are a critical capability in the United States’ homeland security and the Coast Guard’s most important acquisition program, and the Austal USA team is very excited and proud to be delivering this major shipbuilding program for the USA.”

Austal USA President Rusty Murdaugh said: “This contract award is the result of our continued investment in our people and our facilities. We are thrilled for the opportunities this will bring to our local community and our tremendous supplier base, as this program will provide our shipbuilding team the stability for continued growth.”

The Coast Guard’s 110 metre steel OPCs provide a capability bridge between the service’s National Security Cutters, that operate in the open ocean, and the smaller, Fast Response Cutters that operate closer to shore. The new OPCs are capable of conducting a variety of missions including law enforcement, drug and migrant interdiction, and search and rescue operations.

With a range of 10,200 nautical miles at 14 knots and a 60-day endurance period, each OPC will be capable of deploying independently, or as part of task groups, and serving as a mobile command and control platform for surge operations such as hurricane response, mass migration incidents and other emergency events. The Cutters will also support Arctic objectives by helping regulate and protect emerging commerce and energy exploration in Alaska.

With the award of the OPC, Austal USA is executing a myriad of shipbuilding programs for the United States Navy and United States Coast Guard; with construction continuing on the aluminum Independence-variant Littoral Combat Ship (LCS) and Spearhead-class Expeditionary Fast Transport (T-EPF) programs and the steel hulled Navajo-class Towing, Salvage and Rescue (T-ATS) ships and Auxiliary Floating Drydock Medium under contract for the United States Navy.