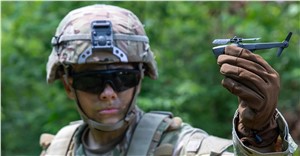 In late 2018 the U.S. Army began acquiring Black Hornet 3’s to support the SBS effort. Since then, it has placed orders totaling nearly $115 million for the multi-faceted nano drone.

Extremely light and well suited for operations in contested environments, nearly silent, and with a flight time up to 25 minutes, the combat-proven, pocket-sized Black Hornet PRS transmits live video and HD still images back to the operator. Its information feed provides soldiers with immediate covert situational awareness to help them perform missions more effectively.

“The Black Hornet is one tough small package with tremendous capabilities that gives warfighters much needed situational understanding and standoff before undertaking dangerous operations,” said Dr. JihFen Lei, executive vice president and general manager of Teledyne FLIR Defense. “We are proud to support the Army’s Soldier Borne Sensor program for more than three years and will continue to invest in nano-UAS technologies that are changing today’s battlefield.”

The award-winning Black Hornet 3 is designed and built by Teledyne FLIR in Norway. Deliveries of the latest SBS orders will begin midyear 2022.