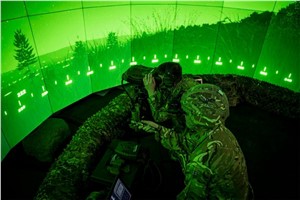 As part of a contract initially awarded in 2019, JFST provides a range of training systems for the individual, team and collective training of personnel responsible for ground and air fires. JFST has delivered simulation systems that are modular and scalable for maximum flexibility in use and built using open architecture to enable quick and cost-efficient updates and upgrades over the systems’ service life.

To date, 8 dismounted systems and one mounted system have been delivered across two Phase 3 Training Establishments, deployed in three locations in Wiltshire and North Yorkshire, with full roll-out of the systems to be expanded nationwide. The systems are primarily in use by Fire Support Teams and Joint Terminal Attack Controllers, the majority of which are from the Royal School of Artillery. At full operational capability, JFST will be deployed to support all three services.

As of Spring 2022, JFST has been used to actively support three Phase 3 training courses run by The Royal Artillery, and user feedback suggests that the capabilities, flexibility and fidelity of JFST has brought a step-change to training in the virtual environment.

JFST represents yet another example of Elbit Systems UK’s contribution to the UK MOD’s major training programmes across all domains; including a contract to deliver the Interim Combined Arms Virtual Simulation (Deployable) ICAVS(D) for regular and reserve troops in the British Army; leading Synthetic Training Integration for the Royal Navy’s Project Selborne; and the delivery and operation of three types of aircraft through the company’s subsidiary Affinity, for the UK Military Flying Training System.