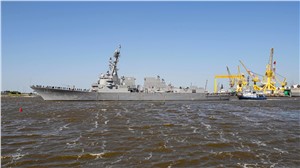 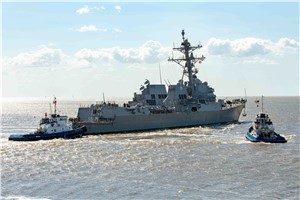 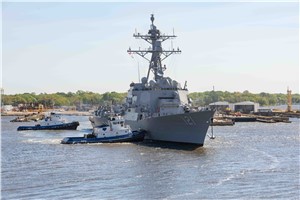 “I’m very grateful for the resilient and dedicated shipbuilders on our team, each is world class,” said Kari Wilkinson, president of the Ingalls Shipbuilding.

"Watching Frank E. Petersen Jr. sail away demonstrates what this shipyard is capable of, even in the face of a pandemic,” said Donny Dorsey, Ingalls vice president of operations and previously DDG 121 ship program manager. “The Ingalls Shipbuilding team, and all those that contribute to the mission, are the best. Despite challenges, the hard work of the entire shipbuilding team enable this very proud day — watching the Navy sail this ship and join the fleet to support the defense of our nation.”

Frank E. Petersen Jr. is the 33rd destroyer Ingalls has built for the U.S. Navy, with five more currently under construction at Ingalls, including Lenah Sutcliffe Higbee (DDG 123), Jack H. Lucas (DDG 125), Ted Stevens (DDG 128), Jeremiah Denton (DDG 129) and George M. Neal (DDG 131). Ingalls is working with the Navy to keep the destroyer line strong as the Navy transitions to the next generation of guided missile destroyers.

Frank E. Petersen Jr. is named to honor the U.S. Marine Corps’ first African American aviator and general officer. After entering the Naval Aviation Cadet Program in 1950, Petersen went on to fly more than 350 combat missions during the Korean and Vietnam wars.