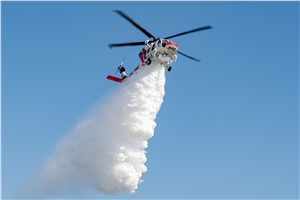 “This agreement addresses a critical need to deliver the proven FIREHAWK helicopter into customer hands in months not years,” said Jason Lambert, vice president, Sikorsky Global Commercial & Military Systems. “United Rotorcraft and Air Methods have taken a leadership position to advance the availability of this proven aircraft in anticipation of future orders from U.S. and international markets. This proactive approach is one that we readily support to meet future demand. Doing so also honors our founder Igor Sikorsky, whose vision that the helicopter be a unique instrument for saving human lives continues to be fulfilled.”

The agreement will allow United Rotorcraft to contract for bulk orders of S-70 Black Hawk® aircraft, much as it did in August 2021 with an initial five-aircraft order from Sikorsky. Four of the five aircraft will arrive at United Rotorcraft’s Englewood, Colorado completions facility this year from the S-70 production line at PZL Mielec, a Lockheed Martin company in Poland. The first aircraft of the bulk order will be modified to the FIREHAWK configuration for delivery in 2023 to the State of Colorado.

“The success of the Firehawk helicopter in California to attack and suppress wildfires in their initial stage has spurred fire agencies globally to evaluate this unique asset, both as a firefighting tool and a multi-mission aircraft for year-round rescue and medical assistance,” said Larry Alexandre, United Rotorcraft president. “Federal, state and local legislatures facing wildfire threats are more likely to authorize an aircraft purchase if the aircraft is readily available. With Sikorsky’s assistance as aircraft manufacturer, United Rotorcraft and Air Methods are bringing the world’s most efficient medium lift firefighting helicopter to the market at a speed not previously seen.”

United Rotorcraft recently introduced a digital control mode that gives either pilot greater control of water released to suit the type of fire, and in 2023 will offer both the currently available aluminum tank and a new lightweight, composite tank option.