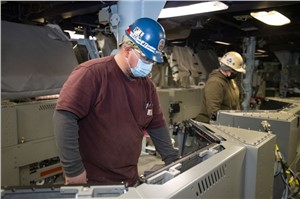 “I am again very proud of our DDG 51 team and the work they have done,” said Kari Wilkinson, Ingalls Shipbuilding president. “Not only have they completed a significant program milestone aboard the first Flight III destroyer, but they have done so in the face of a pandemic. This team continues to prove it’s as strong as the ships it builds.”

The Flight III upgrade incorporates a number of design modifications that collectively provide significantly enhanced capability. Aegis light-off is an important milestone for integrating and activating all of the new electric plant equipment and combat systems.

“Through perseverance, a good plan, execution of that plan and relentless follow up, our shipbuilders have reached ALO,” said Jeff J. Davis, DDG 125 construction manager. “There is a huge collaboration effort between Ingalls, the Navy, industry partners and multiple other contractors.”

Arleigh Burke-class destroyers are highly capable, multi-mission ships and can conduct a variety of operations, from peacetime presence and crisis management to sea control and power projection, all in support of the United States military strategy. Guided missile destroyers are capable of simultaneously fighting air, surface and subsurface battles. The ship contains a myriad of offensive and defensive weapons designed to support maritime defense needs well into the 21st century.