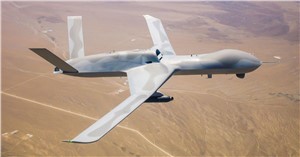 In the two-hour flight, the Avengers flew over the high desert of southern California. During the flight, Legion Pod’s IRST21® infrared search and track system detected multiple fast-moving aircraft operating in the area. On-pod Lockheed Martin fusion software blended the sensor data from both pods in real time and the Avengers streamed it to the ground station.

“This is the first time IRST systems on multiple autonomous aircraft have delivered merged air threat data to users on the ground,” said Scott Roberson, director of Sensors and Global Sustainment Advanced Programs at Lockheed Martin. “It’s a big step in developing a common operating picture that boosts situational awareness across domains in joint operations.”

This fusion technology was previously tested in F-15-equipped Legion Pods and datalinks at the Northern Edge operational exercise earlier this year. Legion Pod is a proven long-range passive IRST sensor on multiple platforms including two types of Avenger UAVs. Since Legion Pod is in production, it could fly real-world missions as soon as U.S. Government customers would like if there was an urgent need.

The fusion engine’s ability to take in multiple sensor sources makes it a central node that connects Legion Pods on manned and unmanned platforms. Lockheed Martin has plans to test the Legion Pod with datalink capability among F-16s as well as F-15-to-F-16 sensor fusion. The sensor’s open design readily supports Joint All Domain Operations requirements for alternative datalink architectures.

The Open Mission System (OMS) architecture of the Legion Pod sensor allows for rapid integration, making the technology transportable among aircraft platforms and reducing the timeline and complexity to integrate on new platforms.