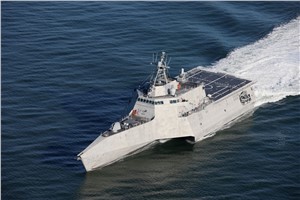 Austal Limited is pleased to announce Austal USA has delivered the future USS Canberra (LCS30) to the United States Navy.

The Independence-class Littoral Combat Ship (LCS) is the second LCS Austal USA has delivered to the Navy in 2021.

Austal Limited Chief Executive Officer Paddy Gregg said the latest LCS delivery was of great interest and significance as the vessel was named after Australia’s national capital, Canberra and was sponsored by Australia’s Foreign Minister, Senator the Honourable Marise Payne.

“We were honoured to have Senator Marise Payne lay the keel for the future USS Canberra in March 2020, and now we’re very pleased to be delivering the completed vessel to the Navy, on time and on budget,” Mr Gregg said.

“Canberra is the 15th Independence-class Littoral Combat Ship that Austal USA has delivered to the US Navy, since 2010; an outstanding track record for a multi-billion-dollar program, comprising 19 ships in total.

“Add on the twelve Spearhead-class Expeditionary Fast Transport (EPF) vessels that Austal USA has also delivered, during roughly the same timeframe, and you get a clear picture that our Mobile, Alabama shipyard is an incredibly efficient, value-adding asset within the United States’ defence industrial base.”

In October 2021, Austal USA was awarded a contract for the detailed design and construction of two US Navy Towing, Salvage, and Rescue (T-ATS) ships, the first contract for Austal’s new steel construction facility. Austal has recently been awarded several post-delivery service-related contracts for the LCS program including Sustainment Execution Contracts (SEC) for both classes of LCS, on the east and west coasts of the United States, and a further contract to support LCS deployed to the Western Pacific and Indian Ocean.

Further, Austal USA recently announced the company had completed the purchase of a lease on waterfront property to establish a permanent ship repair facility in the Port of San Diego – a 6-hectare site enabling ship repairs and maintenance on US Navy, US Coast Guard and Military Sealift Command ships. The facilities will include a new dry dock, designed specifically to service small surface combatants and other small to medium size ships.

This ASX announcement has been approved and authorised for release by Patrick Gregg, Austal Limited’s Chief Executive Officer.

Tell a friend:
Austal USA Delivers the Future USS Canberra (LCS 30) to the US Navy