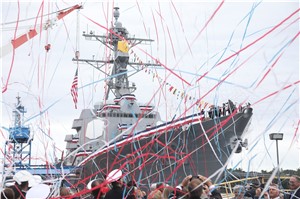 The ship’s namesake served in the U.S. Senate for 36 years from 1979-2015. As the longest serving senator in Michigan state history, Levin became a staunch supporter of the armed services through his work and leadership as Chairman and Ranking Member of the Senate Committee on Armed Services.