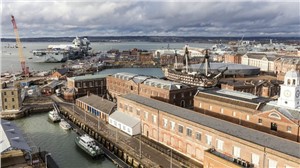 Today, BAE Systems marks its first day as part of the team that will deliver the five year Future Maritime Support Programme (FMSP) alongside the Ministry of Defence (MOD) for the Royal Navy.

In March, BAE Systems was selected by the MOD to deliver the Ship Engineering Delivery & Management contract at Portsmouth Naval Base. A joint venture between BAE Systems and KBR, named KBS Maritime, was awarded the Hard Facilities Management (FM) & Alongside Services contract at Portsmouth. Together the two contracts are valued up to £1.3 billion.

“Our strong past performance and our ability to deliver the Royal Navy’s future requirements were instrumental in winning the two largest Portsmouth FMSP contracts,” commented Jon Pearson, Warship Support Director for BAE Systems’ Maritime Services business. “Under previous contracts we’ve helped the MOD transform Portsmouth Naval Base, delivering major infrastructure improvements and reducing carbon emissions by 65% over the last 15 years, while at the same time improving the availability of the Royal Navy’s warships. Under FMSP, we will continue to transform to meet the Royal Navy’s evolving requirements and deliver with the same pride and emphasis on performance, innovation and availability.”

“As the Royal Navy delivers its part of the UK’s Global Britain strategy and continues on its journey to becoming a digital navy by 2025, BAE Systems will continue to develop the capabilities our nation’s sailors need to succeed in an ever changing global defence environment,” commented David Mitchard, Managing Director of BAE Systems’ Maritime Services business. “Under the new contract, we will transform using new digital and data technologies, further increasing the availability of ships and the level of support carried out by our highly qualified personnel wherever the Royal Navy is deployed around the world. We’re excited by the opportunity to continue delivering transformation alongside our new service provider partners to support the Royal Navy in, and from, Portsmouth.”

Built on a record of success
BAE Systems has supported the Royal Navy for more than 20 years as the MOD’s industry partner in Portsmouth, managing the entire estate and transforming how the Portsmouth flotilla was managed, ultimately improving the availability of its warships.

As well as improving ship availability, BAE Systems helped the MOD to deliver a number of major improvements to the base under Maritime Support Delivery Framework, with the end goal of creating a 21st century naval base fit to support the UK’s Carrier Strike Group, all while maintaining operational tempo. These improvements include:

Alongside operational improvements, BAE Systems has helped reduce carbon emissions from 100,000 tonnes to 35,000 tonnes per annum over the last 15 years. It has also helped the MOD to develop its carbon profile and roadmap for Portsmouth Naval Base and will support its implementation to achieve the MOD’s goal of being Net Carbon Zero by 2050.

Tell a friend:
BAE Begins Delivery of New Programme to Support the Royal Navy in Portsmouth