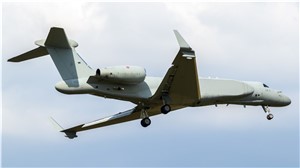 The Airborne ISR Market is estimated to be valued at USD 9.9 billion in 2021. It is projected to reach USD 12.8 billion by 2026, recording a CAGR of 5.1% in terms of value. The market is driven by factors such as the rising demand for phased array radars for better operational efficiency during air surveillance, border surveillance, and commercial applications. The airborne ISR market is growing at a significant rate across the world, and a similar trend is expected to be observed during the forecast period. The rising demand of UAVs for airborne ISR applications, increasing procurement of Airborne ISR systems due to growing transnational and regional instability, increasing use airborne ISR based geological surveying for scientific research purposes, rapid advancement in artificial intelligence, big data analytics and robotics technologies are fueling the growth of the airborne ISR market.

The Airborne ISR market is being driven by the increased adoption of advanced combat warfare systems to gain an advantage over enemy forces and the increasing defense expenditure of various countries. Industry players are undertaking R&D activities that focus on improving the capability of these radar to perform in all-weather conditions and provide support in commercial as well as defense operations, such as long-range surveillance, search & rescue, drug interdiction, counterterrorism, and maritime environmental support, among others. Along with this, an increase in the usage of UAV systems and the need for ground surveillance and communication act as key driving factors for the Airborne ISR market.

Based on solution, the systems segment is projected to lead the airborne ISR market from 2021 to 2026
Development and procurement of modern airborne ISR systems, such as targeting and surveillance systems and communication systems, for various applications is driving the demand for the airborne ISR market globally. In February 2019, US border security agencies started using targeting and surveillance systems upon aerostats on the US-Mexico border which are particularly good at detecting low-flying aircraft, such as the ones drug smugglers use, because their radar isn’t blocked by hilly terrain the way ground-based radar can be. Newer, smaller versions can fly closer to the ground and carry radar that can better identify people.

Based on end user, defense segment is anticipated to register the highest growth from 2021 to 2026
In the defense end user segment, airborne ISR systems have used the department of defense intelligence agencies and other government applications. Airborne ISR systems function as a data grid that collects critical information from various sensors, such as radar, sonar, and electro-optic, which are installed on various airborne platforms. In May 2021, the US Department of Defense awarded a combined USD 950 million multiple award contracts with a firm-fixed-price task order to a total of 22 different companies which include key players like L3 Harris Communications Integrated Systems, Leidos, MAG Aero, Meta Special Aerospace, Northrop Grumman Systems Corp., Textron Corp., etc. Contractors will provide various Foreign Military Sales (FMS) customers engineering assessments, procurement of intelligence, surveillance and reconnaissance (ISR) sensors and related equipment, integration of ISR sensors into non-standard aircraft, and contractor logistics support for non-standard aircraft with ISR sensors.

Based on platform, unmanned systems segment is anticipated to register the highest growth from 2021 to 2026
Unmanned systems include Remotely Piloted Air Systems (RPAS) in which the unmanned aerial vehicles (UAV) is controlled by a pilot using a radio data link from a remote location. UAS can also include an autonomously controlled UAV or, more likely, a semi-autonomous UAV. Unmanned systems offer surveillance solutions by integrating TCAS, Terrain Awareness, Transponders, Distance Measuring Equipment and ADS-B into a single simplified unit that provides unmeasured tactical performance and safety. In August 2020, AeroVironment, Inc. announced it received a firm-fixed-price contract award valued at USD 45 million for RQ-11B Raven small unmanned aircraft systems (UAS) and initial spares packages. These will be used by soldiers to conduct battlefield reconnaissance and provide their units with a greater level of security.

North America is projected to lead the airborne ISR market from 2021 to 2026
Significant investments in R&D activities for the development of advanced ISR solutions by key players and increased demand for precision and accurate ISR systems are some of the factors expected to fuel the growth of the airborne ISR market in this region. The US is expected to drive the growth of the North American airborne ISR market during the forecast period, owing to easy access to various innovative technologies and significant investments being made by manufacturers in the country for the development of improved military ISR and geospatial monitoring systems. Several developments have taken place in the field of airborne ISR in the region. For instance, in January 2020, Telephonics Corporation (US) successfully developed and tested its MOSAIC Active Electronically Scanned Array (AESA) surveillance radar system with the US Navy’s MH-60S helicopter. The MOSAIC AESA surveillance radar is capable of performing continuous scheduled Inverse Synthetic Aperture Radar (ISAR) imaging tasks while simultaneously conducting surveillance, detection, and tracking operations.