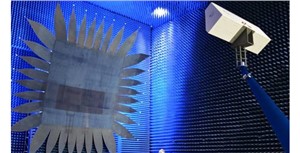 DARPA today announced that a first-of-its-kind sensor system developed under the Arrays at Commercial Timescales – Integration and Validation (ACT-IV) program has transitioned to the Air Force Research Laboratory (AFRL) for continued advancement and experimentation. Northrop Grumman, the primary research team on the ACT-IV program, facilitated the transition of the advanced digital active electronically scanned array (AESA) to the Wright-Patterson Air Force Base in Dayton, OH.

ACT-IV is a novel multifunction AESA system that is capable of simultaneously performing different operations, such as radar, electronic warfare (EW), and communications functions, at different modes. At the system’s core is an advanced semiconductor device – or common module – fabricated in commercial silicon that was originally developed by DARPA’s Arrays at Commercial Timescales (ACT) program. Now concluded, the ACT program sought to shorten phased array design cycles and simplify the process of upgrading fielded capabilities. The ACT common module – a digitally-interconnected building block from which large systems can be formed – was developed as a more efficient alternative to substantial undertakings with traditional monolithic array systems. In addition to the ACT module, the ACT-IV system employs a computational model capable of efficiently receiving and computing on the significant amounts of input data generated by each module.

“With the ACT-IV program, we were able to realize the vision of ACT by developing an advanced sensor system with ACT common modules,” said Tom Rondeau, the program manager leading ACT-IV. “The resulting system went through extensive testing and demonstrations to validate its capabilities, proving out a sixth-generation array with a scalable, customizable core that could work across varied application spaces. Transitioning the ACT-IV system to AFRL will enable continued exploration of digital, multifunctional RF technologies for defense needs.”

Another critical aspect of the ACT-IV program was the creation of a third-party developer community to enable continued use and advancement of the technologies. Teams from government research labs and university-affiliated research centers developed a curriculum and training program that provides developers and researchers with the necessary knowledge and know-how to continue building on the work of the ACT-IV program. The growing community has already generated a number of tools and applications, including a more agile software development model for RF phased arrays.

At the Wright-Patterson Air Force Base, the ACT-IV system will become a Department of Defense (DoD)-wide asset for testing and experimentation with new modes of radar, communications, sensing, and EW. The software, algorithms, and capabilities developed on the program will also transition to next-generation multifunction RF systems to support advanced defense development programs and a future open-architecture environment.