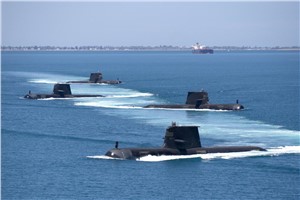 Beneath the impressive amphibious landings and multi-national fleet manoeuvres lurked an unseen menace, keeping sailors on their toes during Exercise Talisman Sabre 21 (TS21).

Royal Australian Navy submarines HMA Ships Collins and Rankin were on the prowl to disrupt surface-ship operations during a series of attack and interdiction missions.  A United States submarine also contributed to the sub-surface training scenario.

Unlike the submarine wolf packs of WWII, today’s subs are lone hunters; dodging sonar and other sensors looking for a torpedo shot.

“It does not mean the submarine will always win. There are ways to defeat submarines through manoeuvering and employment of air and surface assets,” he said.

As part of the opposing force for a portion of TS21, subs conducted sea-denial operations against the allied fleet, limiting their freedom of movement on the water’s surface.

This forced surface elements to undertake what Captain Bartlett referred to as the most complex type of maritime warfare – anti-submarine operations.

“That’s because of the environment and the capabilities of modern submarines,” Captain Bartlett said.

“Much of the training is based around the employment of fixed and rotary-wing aircraft, as well as surface ships.”

Captain Bartlett said anti-submarine warfare was something surface elements had to perform over extended periods to keep adversaries at bay, with difficulty depending on a variety of conditions.

“It all depends on the environment and the water in which you operate,” Captain Bartlett said.

The exercise included time to debrief the submarine teams after each serial and apply what they had learned.

“You cannot simulate the anti-submarine warfare training environment to the same extent without [other submarines],” Captain Bartlett said.

“You need a submarine with the thinking, reacting crew to train against.”