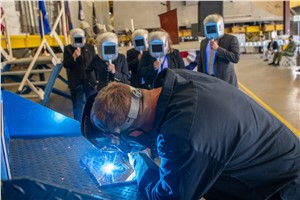 “We are proud to build another proven warship that allows our Navy to carry out missions around the world. All of us at Lockheed Martin, including our hardworking team in Marinette, Wisconsin, look forward to working with the U.S. Navy to continue delivering highly capable and adaptable Freedom-variant Littoral Combat Ships to the fleet.” - Steve Allen, Lockheed Martin Vice President of Small Combatants and Ship Systems

“I am humbled and honored to be the sponsor of a ship that bears the name of the great city of Cleveland, with its rich and storied history of support to our armed services. I look forward to a lifelong relationship with the ship and her crew as they proudly serve the Navy and our nation.” - Robyn Modly, Ship Sponsor of the future USS Cleveland (LCS 31)

“Our team at Fincantieri Marinette Marine is proud to celebrate the keel laying of the LCS 31 with the gracious citizens of Cleveland. This milestone is a testament to the power of cooperation and forward thinking by the entire Freedom Team and our customer, the United States Navy. It also bears witness to all the dedicated craftsmen and women working in our FMG system of shipyards.” - Jan Allman, CEO of Fincantieri Marinette Marine

Background:
The laying of the keel celebrates an important milestone in the life of the future USS Cleveland (LCS 31) and marks a significant event for the construction of the nation’s 31st Littoral Combat Ship (LCS). The USS Cleveland will be the fourth commissioned ship in naval service, since World War I, named after Cleveland, the second-largest city in Ohio and home to countless Navy and Marine Corps veterans. With the city’s deep ties to maritime service since the turn of the 20th century, LCS 31 will honor Cleveland’s longstanding naval history.