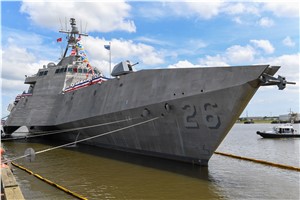 The Navy commissioned its newest Independence-variant littoral combat ship USS Mobile (LCS 26) during a ceremony in Mobile, Alabama, May 22.

Due to COVID-19 limitations, 400 guests attended the socially distanced ceremony for the littoral combat ship named in honor of the city in which it was built.

“The United States has been the greatest source of good in the history of the world and we will continue to be a force for good because of the brave men and women that we have here today,” said Tuberville.

Guest speakers for the event also included the Honorable Kay Ivey, Governor of Alabama, the Honorable Sandy Stimpson, Mayor of Mobile and the Honorable James Geurts performing the duties of the Undersecretary of the Navy.

“The ships that this city has built are literally sailing on every ocean right now,” said Geurts, referencing ship manufacturer Austal USA, based in Mobile, Alabama.

“We have the distinction of the USS Mobile being built and commissioned in its namesake city here in the historic port of Mobile,” said Byrne. “We welcome the ship to the United States fleet that bears our great name and comes on great Navy tradition.”

During the ceremony, Mobile’s commanding officer, Cmdr. Christopher W. Wolff, reported the ship ready and Byrne gave the traditional order to “Man our ship and bring her to life!”

“The commissioning of the fleet’s newest warship is an awesome occasion and with it comes the equally awesome responsibility to prepare ourselves to go forward and conduct our nation’s business,” said Wolff.

The ceremony completed a weeklong series of events celebrating the ship and its namesake city. USS Mobile is the fifth ship named in honor of the port city on Alabama’s Gulf Coast.

The LCS is a fast, agile, mission-focused platform designed to operate in near-shore environments while capable of open-ocean tasking. The LCS can support forward presence, maritime security, sea control, and deterrence.