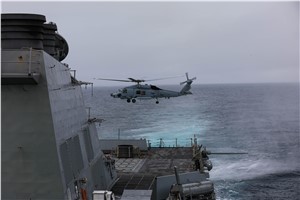 "This high-end exercise leveraged technological improvements to strengthen the interoperability between surface, air, and subsurface, units in the undersea domain," said Cmdr. Patrick M. Chapman, commanding officer of USS Arleigh Burke (DDG 51). "The lessons learned from operating in these waters will inform anti-submarine efforts in the years to come."

“Black Toro is a great opportunity to learn the anti-submarine environment in the North Atlantic,” said Capt. Joseph Gagliano, commodore of CTF-65/DESRON 60. “Every time we work together in these challenging waters, we stay one step ahead of the adversary.”

To support the simulated multi-threat environment, maritime patrol aircraft worked with surface vessels to locate the simulated adversary submarines. Exercises like this highlight the inherent flexibility of maritime forces operating at sea. This exercise strengthened combined anti-submarine warfare proficiencies above, under, and on the water.

The North Atlantic is critical to the United States Navy in protecting the homeland and to our commitment of regional peace and security. Real-time forces working together in forward operating area provide incomparable development of crews and mission sets. These opportunities refine maritime warfare tactics across the entire spectrum of naval operations.

"The event highlights the superb ability of our forces to work together to improve our tactics, techniques and capabilities in the undersea warfare environment." Capt. James O’Harrah, commodore of CTF-69.

CTF-69 is responsible for planning and coordinating area submarine and anti-submarine warfare operations in the SIXTHFLT area of responsibility.

Commander, Task Force 63 (CTF-63) is the operational commander of all the SIXTHFLT air and sea logistics. While in theater, Military Sealift Command’s Naval Fleet Auxiliary Force and Special Mission ships report to CTF-63 along with cargo planes that support SIXTHFLT and U.S. European Command logistics missions.

Arleigh Burke and Roosevelt are two of five U.S. Navy destroyers based in Rota, Spain, and assigned to Commander, Task Force 65 in support of NATO’s Integrated Air and Missile Defense architecture. These Forward-Deployed Naval Forces-Europe ships have the flexibility to operate throughout the waters of Europe and Africa, from the Cape of Good Hope to the Arctic Circle, demonstrating their mastery of the maritime domain.

U.S. Sixth Fleet, headquartered in Naples, Italy, conducts the full spectrum of joint and naval operations, often in concert with allied and interagency partners, in order to advance U.S. national interests and security and stability in Europe and Africa.