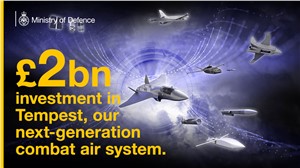 Defence Minister Jeremy Quin has outlined how more than £2bn of investment in the Tempest programme will power the next phase to build a world-leading new combat air system in a keynote speech at RUSI today.

The Integrated Review and Defence Command Paper set out the vital importance of the programme to global security and UK prosperity, which is why the UK will invest over the next four years to move into the next phase to design and deliver the next-generation system.

With strong global alliances and a world-class industrial base, the UK is stepping forward and driving international partnerships with Italy and Sweden. The work will sustain and support a sector which already generates £6bn a year and employs over 46,000 people across all four corners of the UK.

The sector and the broader UK defence industry is set to be boosted by the new Defence Industrial and Security Strategy, unveiled yesterday, which will ensure that the UK retains a competitive, innovative and world-class defence and security industry.

Speaking at RUSI’s Combat Air Power conference, Defence Minister Jeremy Quin said:
"As our recently published Integrated Review underlined, technology and the threats we are facing have moved on. In the intervening decades, the likes of Russia and China have studied our strengths in the air and begun developing the capabilities to not only counter but surpass us. If we fail to outmatch these targets and they continue at this pace, we could find ourselves locked out of the skies. The freedom of the air cannot be taken for granted."

"We have launched the next phase of our programme to design and deliver Tempest and I am proud to say that, over the next four years, we will invest more than £2bn as Government into a world-leading future combat air system to keep us and our allies safe alongside us, leveraging additional investment from our first rate international and industrial partners."

In his speech, the Minister will outline how the West has had full freedom of manoeuvre in the air since the first Gulf War in 1991, which marked a shift in focus towards mainly counter insurgency operations. He will go on to explain how this assumption can no longer be made, highlighting that advanced surface-to-air missiles and electronic attack systems developed by Russia have been used in Syria, whilst China has been developing and fielding innovative systems at an ever-faster rate. The UK is developing Tempest with the intensifying threat picture in mind, ensuring it has a system able to keep the country and its allies safe for the rest of the century.

The MOD’s Director of Future Combat Air, Richard Berthon, said:
"Combat Air is vital to the protection of the UK and our contribution to global security. The Integrated Review shows the UK’s commitment to staying at the cutting edge of future Combat Air technologies. We are working closely with industry and international partners to launch the next phase of delivering the Tempest concept. This is an exciting milestone as we seize the opportunities created by digital design and delivery to revolutionise combat air delivery and preserve our operational advantage for decades to come."

The elements of Tempest will connect and combine to provide a battle-winning combat air system for the rest of the 21st century. A core aircraft will likely form one element of a network of capabilities which could include long-range weapons, space-based sensors and supporting uncrewed aircraft.

The Minister will stress the importance of software as well as hardware in delivering the system, highlighting how the department is developing ‘PYRAMID’, an open mission system architecture to ensure software can be updated more rapidly. He will also set the challenge to ‘digitise’ the industry, explaining how using a digital environment can slash costs and time to a game-changing extent.

The UK is now launching the concept and assessment phase to design and deliver Tempest with its partners - this will accelerate analysis and set out how to deliver the project. The programme is targeting Initial Operating Capability from 2035 so that, over time, the system can replace Typhoon as it reaches the end of its service life.

Tell a friend:
Defence to Invest GBP2bn in Next Stage of UK Combat Air System