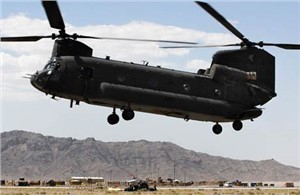 Dozens of defence industry jobs will be secured in Queensland after the Morrison Government committed to a 12-month extension of a contract that provides support for Defence’s Chinook heavy-lift helicopters.

“This contract assures 45 ongoing positions for the local economies in Townsville, Oakey and Brisbane, showing once again that we are leading the way when it comes to growing jobs and the Australian economy,” Minister Price said.

“The Chinook helicopter fleet has a long history of providing outstanding support to operations, both overseas and locally in Australia.”

Army’s Chinooks were an important lift and troop transport capability on operations in Afghanistan from 2006 to 2013, and were more recently deployed in support of Operation Bushfire Assist in 2019-2020.

“These contract changes will increase the level of services provided to Defence and expand the maintenance and training support provided for the CH-47F Chinook fleet,” Minister Price said.

“The recent increase in services for the Chinook fleet will continue to boost opportunities for defence industry in Queensland.”

“This contract extension demonstrates our commitment to local jobs, while also ensuring the Army, and particularly the 5th Aviation Regiment, is well-equipped,” Mr Thompson said.

“These ongoing positions are important jobs for Townsville, not only for those who work in them, but also the flow-on economic benefits they bring for our city.”