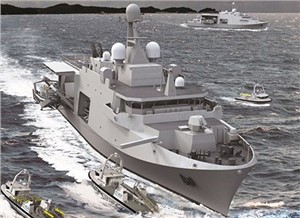 As the construction of the first joint Belgian and Dutch replacement Mine Countermeasures (rMCMV) vessel will start in February 2021, Terma is proud to announce that the SCANTER 6000 radar has been selected for this program which is led by Belgium Naval & Robotics consortium, composed of Naval Group and ECA Group. In this frame, mid-January Terma was contracted by the French shipbuilder Kership - a joint venture between Naval Group and Piriou - to supply 12 units of the renowned SCANTER 6000 naval radar for the MCM vessels.

“The high-resolution SCANTER 6000 radars will enable the Belgium and Netherlands MCMV’s to detect and track small targets – from the horizon up to the ship itself – on the surface and in low-level air space in all weather conditions”, explains Sales Director Lars Veis Laursen from Terma.

Terma will deliver the first unit in 2022 and the deliveries will continue for the following eight years.

The project is now in full motion and the consortium Belgium & Naval Robotics, consisting of the French companies Naval Group and ECA Group, will deliver the first new MCMV’s in April 2024 to the Belgian Navy to be followed by delivery to the Royal Netherlands Navy. Both navies will receive six ships each.

“An important part of the project is the new concept of stand-off mine warfare; the motherships remain outside the mine danger area and their MCM tools operate from the mothership to detect, classify and destroy mines from a great distance, also over the horizon”, explains General Manager Arjen Vos from Terma’s Netherlands subsidiary in Leiden.

SCANTER 6000
The SCANTER 6000 is a coherent X-band 2D solid state radar developed by Terma to address market requirements for improved surface and low airspace situational awareness in all-weather and sea conditions. It has been specifically designed as an affordable solution to plug the gap between standard marine navigation radars and the very expensive military surveillance radar systems. The radar provides unique capabilities for advanced navigation, air surveillance including helicopter control and surface surveillance with tracking of small targets like jet-skies or autonomous surface vessels out to the horizon.

The SCANTER 6000 naval surveillance radar is in delivery to the Royal Navy’s new Type-26 Global Combat Ships and T31 Frigates. The radar is currently in service on most French Navy’s major warships including the Charles De Gaulle aircraft carrier and on the Danish Navy’s Frigates of the Iver Huitfeldt class. It is also supplied to the German Navy and in other regions for new OPV programs as well as update programs.