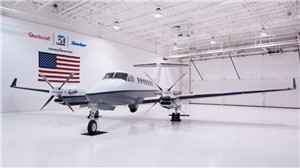 Textron Aviation announced today it recently delivered a Beechcraft King Air 350i aircraft equipped with multiple special mission modifications to Japcon Incorporated. The modifications include a removable, belly-mounted Forward-Looking Infrared (FLIR) installation, forward executive cabin, communications equipment and racks. After further modifications in Japan including a medical configuration, the King Air 350i will enter service as a liaison/reconnaissance (LR-2) aircraft, and will be owned and operated by the Japan Ground Self Defense Force (JGSDF).

The Beechcraft King Air 350i is designed and manufactured by Textron Aviation Inc., a Textron Inc. (NYSE:TXT) company.

“We are honored to expand our relationship with the JGSDF. This aircraft will join a fleet of seven other LR-2 King Air 350 turboprops, which has provided reliable service for more than 20 years,” said Bob Gibbs, vice president, Special Mission Sales for Textron Aviation.

The LR-2 is the JGSDF’s only fleet of fixed-wing aircraft. The LR-2 provides transportation between airfields throughout Japan, especially when transporting emergency patients from remote islands. In addition to a reconnaissance camera, the new LR-2 aircraft is equipped with devices for video transmission and infrared night-vision to enhance its capacity to collect visual information. The aircraft will be operated by the Renraku Teisatsu Hikotai, a JGSDF Communication and Reconnaissance Squadron, based at Kisarazu Airfield in the Chiba Prefecture.

“The LR-2 fleet has been serving an enduring mission by providing transport, reconnaissance, and medical evacuation operations in Japan,” said Gibbs. “When the JGSDF needed a modern aircraft with low direct operating costs, it again chose the Beechcraft King Air 350 platform.”