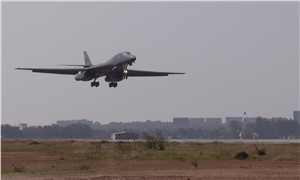 This is the 13th iteration of Aero India. U.S. participation provides the opportunity to build stronger relationships between the U.S. and India and is an ideal forum to showcase U.S. defense aircraft and equipment and ultimately contribute toward our interoperability with other countries.

This year Aero India offered a hybrid exhibition of in-person aerial demonstrations as well as virtual options for viewing due to the global COVID-19 pandemic.

While the hybrid approach was a first for the trade show, Aero India can lay claim to a much more significant introduction -- the inclusion of U.S. bombers.

More than 40 Airmen and a B-1B Lancer from Ellsworth Air Force Base, South Dakota, deployed in support of Aero India 2021, showcasing the long-range strike platform’s capabilities during a live aerial demonstration.

This was a historic moment and marks the first time an American bomber has touched down in India in the history of the Republic of India. The last time a bomber was on Indian soil was more than 75 years ago – October 1945 – when India was under British rule.

"Bomber participation demonstrates the strength of our partnership and our shared commitment to global security and a rules-based international order," said Maj. Gen. Mark Weatherington, Eighth Air Force and Joint-Global Strike Operations Center commander, who was among the U.S. military delegates in attendance. "Our presence and engagement today is one of great historical significance that we hope to build on in the years ahead."

While the B-1 flyover provided a visual demonstration to the United States’ commitment to stability within the Indo-Pacific region, it also gave way for another opportunity: the B-1 was not flying alone, but alongside an Indian Air Force (IAF) Tejas fighter jet.

Bomber Task Forces, like the one deployed to Aero India 2021, allow for allied and partner nations to conduct operations focused on interoperability in a joint or coalition environment with the U.S.

The first day of the trade show also marked the beginning of a series of senior military leader and government official talks also referred to as conclaves locally.

According to Rajnath Singh, India's defence prime minister, Aero India serves as a venue for discussions that promote dialogue in a cooperative environment.

For military air chiefs, interoperability was a key focal point.

"Today's initial meetings set the stage for growing our partnership with the government of India and our two air forces," Weatherington said. "I look forward to increased cooperation and engagements as we both pursue a free and open Indo-Pacific."