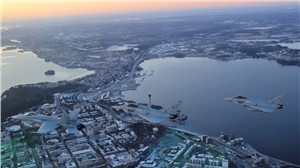 Today, Eurofighter received a formal request from the Finnish Defence Forces to submit its Best and Final Offer (BAFO) to the HX fighter acquisition to replace the Finnish Air Force's F-18 Hornet aircraft.

Speech marksSpeaking on behalf of the four Eurofighter nations, Jeremy Quin MP, the United Kingdom’s Minister of State for Defence Procurement, said:
“This once-in-a-generation opportunity would allow Finland to be part of Europe’s largest defence collaboration programme, working to strengthen aerospace, defence and security in the region.”

“Drawing upon the shared military and industrial benefits it brings with it, the Eurofighter proposal will deliver Finland the ability to independently operate, maintain and control its own aircraft.”

In 2020, the Eurofighter partner nations committed investment that will maintain Eurofighter at the leading edge of combat capability into the 2060s. The German Air Force committed to the acquisition of an additional 38 new Eurofighter aircraft, with advanced new sensors and weapons.  The United Kingdom committed funding to complete the development of an advanced electronically scanning radar.

These latest investments build upon the combat proven capability of a fleet of almost 500 Eurofighters operating with five countries in Europe.  The common threat and shared military requirement make Eurofighter a strong choice for Finland.

Tell a friend:
Finland has a 'Once in a Generation Opportunity' to Strengthen European Defence and Security Co-operation