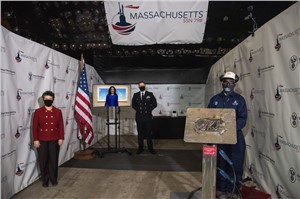 “This construction milestone is typically a small ceremony with shipbuilders and the submarine’s crew in attendance,” said Jennifer Boykin, president of Newport News Shipbuilding. “Given the current COVID-19 environment and the precautions it requires, today’s event is smaller than usual in scope, but not in importance.”

“Today’s event is a significant milestone in the life of the boat because it is the official construction kickoff, but it also marks the beginning of an important partnership between our shipbuilders who will build this mighty war vessel and the sailors who will bring her to life,” Boykin added.

Sheryl Sandberg, chief operating officer of Facebook, is the ship’s sponsor. In a pre-recorded video message, Sandberg etched her initials onto a metal plate, signifying the keel of SSN 798 as being “truly and fairly laid.”

Ronnie Payne, a master shipbuilder who has worked on every Virginia-class submarine built at Newport News, then traced Sandberg’s initials with a welding torch at the company’s Supplemental Module Outfitting Facility. The metal plate will remain affixed to the ship throughout its life.

“This year has been difficult for so many, and I am extra grateful for moments like this one when we can celebrate such an important milestone together,” Sandberg said. “I have a deep respect for the shipbuilders who will bring this vessel to life. I am so grateful for the opportunity to build a lifelong bond with this boat and its crew in my role as the sponsor.”

Massachusetts is the 25th Virginia-class fast attack submarine being built under the teaming agreement with General Dynamics Electric Boat. Construction began in March 2017 and is approximately 50% complete. The boat is scheduled for delivery to the Navy in 2023.

“One of the privileges in establishing a command from the very beginning is developing a relationship with the boat’s namesake state — a relationship inherited from our forebears and one that will last the life of the ship and beyond,” said Cmdr. Erik Lundberg, commanding officer of the pre-commissioning unit. “Our mission is clear — deliver the most advanced, most capable warship to the Navy and our nation with an equally advanced and capable crew to bring her to life. The crew of Massachusetts stands ready.”