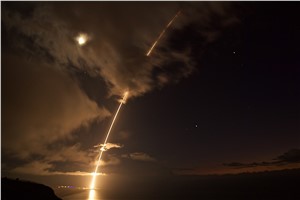 This vital test demonstrated the latest Aegis Baseline 9.C2.0 capability against an ICBM class threat and introduces the ability to provide layered Homeland Defense with Aegis. The target was launched from the Reagan Test Site (RTS) to conduct an Aegis Engage on Remote (EOR) mission.  As designed in the current U.S. command and control architecture, the remote target track and discrimination data was provided by the MDA’s Command, Control, Battle Management and Communications (C2BMC) system and forwarded to Aegis for prosecution.

“This successful intercept is a tremendous accomplishment and confirms we have inherent capability against long range ballistic missile threats that can be deployed to all our Aegis Baseline 9 ships and Aegis Ashore sites – at any moment.  The success of this mission has significant underpinning to the Aegis system’s strategic ability to provide Layered Homeland Defense,” said Jim Sheridan, vice president and general manager at Lockheed Martin.

With the successful completion of four Aegis Baseline 9.C2.0 European Phased Adaptive Approach (EPAA) Phase 3 intercepts of Intermediate Range Ballistic Missile (IRBM), this test demonstrated the ability to provide a globally deployed defensive weapon system. This missile defense system will defend the United States, its friends and allies from hostile ballistic missiles from all regions, all ranges, and during all phases of flight by a single integrated system that is capable of comprehensive layered defense.  As C2BMC capability continues to advance, it will help to unlock even more Aegis weapon system capability and lethality.

“We have evolved Aegis to perform a mission for which it wasn’t originally designed. The flexibility and adaptability of the total system – as well as our industry and government engineering teams -- allows Aegis to answer the call when needed,” Sheridan added.

Engineered to meet any ballistic missile defense need, the Aegis Weapon System is built on 50 years of constant evolution and innovation. Its flexible architecture enables it to fulfill a variety of missions – which is why it’s one of the most deployed combat system in the world.

Aegis Baseline 9.C2.0 is built from the Common Source Library (CSL) and can rapidly integrate new capabilities, including solutions for both SPY-1 and the growing SPY-7 family of radars.