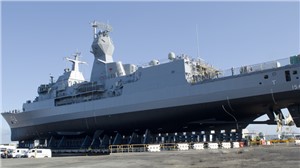 She is the first of fourteen Royal Australian Navy (RAN) ships to have an upgraded maritime satellite communications terminals installed.

The upgraded MASTIS capability is being installed on the Landing Helicopter Dock ships, the ANZAC fleet, the Guided Missile Destroyers and amphibious support ship HMAS Choules.

HMAS Choules, the second ship to be upgraded, will depart Garden Island shortly after Parramatta. The remaining 12 ships will be upgraded during their planned maintenance cycles over the next 12-18 months.

As part of the program, the land based MASTIS training facility will be upgraded at North Ryde for RAN training.

“The company is a world leader in the development and delivery of bespoke communications technologies including the long-standing support to the MASTIS terminals.

“The sailing of the first ships to receive their MASTIS upgrade is a really important milestone in this program and demonstrates our commitment to collaborating with the Commonwealth to bring timely capability to the fingertips of the end users.

“BAE Systems Australia’s commitment to the sustainment of our Navy fleet goes beyond the vessels themselves.”