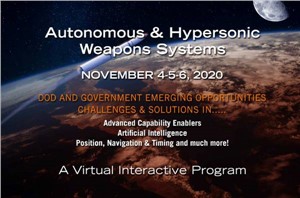 Hypersonic Weapons are accelerating the pace at DoD for the evaluation of potential weapon system concepts and mission sets. As DoD is preparing for $10 billion to enable fielding of Hypersonic Glide Vehicles (HGV) within the next five years, this has created a surge of a rapid R&D for Hypersonic Technologies. Hypersonic Glide Vehicles (HGV) are launched from a rocket before gliding to a target and alternatively, Hypersonic cruise missiles are powered by high-speed, air-breathing engines, or commonly referred to as "scramjets," after acquiring their target.

Evaluation of the U.S. hypersonic test and evaluation infrastructure, the Institute for Defense Analyses noted that "no current U.S. facility can provide full-scale, time-dependent, coupled aerodynamic and thermal-loading environments for flight durations necessary to evaluate these characteristics above Mach 8." Unlike programs in China and Russia, most U.S. hypersonic weapons are to be conventionally armed. As a result, U.S. hypersonic weapons will likely require greater accuracy and will be more technically challenging to develop than nuclear-armed Chinese and Russian systems. There are many technical challenges to overcome, Hypersonic weapons could challenge detection and defense due to their speed, maneuverability, and low altitude of flight. For example, terrestrial-based radar cannot detect hypersonic weapons until late in the weapon's flight.

Autonomous Weapon Systems are types of autonomous military systems that can independently search for and engage targets based on programmed constraints and descriptions. Lethal Autonomous Weapons (LAWs) such as robotic weapons, killer robots or slaughterbots. (LAWs) may operate in the air, on land, on water, under water, or in space. Because artificial intelligence (AI) is still in its early stages, the eventual capabilities and legal implications of autonomous weapon systems remain unknown. However, some very important issues have already been settled.

The Human Machine Interface roles. The human, not the weapon system, makes legal determinations. This means that the human-machine interface must enable the commander to comply with the Law of War. From a legal perspective, the human-machine interface must answer at least three questions. 1st, what precautions can the algorithm take? 2nd, how good is the algorithm at taking those precautions? 3rd, is command input needed to take a precaution? What's exciting today is the explosion of possibilities as we couple AI with modern day sensors and platforms. Some analysts have suggested that future command and control systems may require autonomous functionality to manage the speed and unpredictability of hypersonic weapons

The FY21 President's Budget dedicates serious funding ($1.7 billion) into R&D of Autonomy and Intelligent Robotics and $841 million into A.I. Emerging technologies that can perform autonomously, make intelligent decisions based on what they "sense." and carry out successful missions (with or without a human in the mix), reflect the critical funding for these Advanced Capabilities Enablers to DoD's strategy over the next decade and will rely on Industry innovation to provide solutions for the high end fight.

Attending this Program will provide each virtual attendee the opportunity to obtain invaluable information on the emerging opportunities within DoD, Government and Industry Markets found nowhere else in an intimate live virtual setting. Each Hypersonic & Autonomous Systems program representatives will closely examine emerging technologies and present in 30-minute sessions over three days while also thoughtfully interacting with attendees during their dedicated Q&A sessions.