Sarcos Guardian DX remote-controlled robotic system can be added to a variety of industrial mobility platforms already in use at U.S. shipyards, military bases, and depots 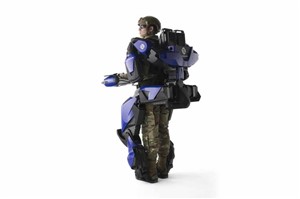 Sarcos Defense, a wholly-owned subsidiary of Sarcos Robotics, today announced that the company has been awarded a contract by the Office of Naval Research to develop a remote-controlled variant of the upper-body of the innovative Sarcos Guardian® XO® wearable exoskeleton robot. The new, platform-agnostic, upper-body variant will be adapted to attach to a variety of mobile bases, such as wheeled or tracked vehicles that can operate at height. These include boom lifts, scissor lifts, and bucket trucks to address maintenance and logistics needs. Leveraging more than 30 years of technology development from prosthetic arms and humanoid robots to powered, full-body exoskeletons, the Guardian® DX defense robot variant and the Guardian® XT commercial robot variant will provide unparalleled strength, dexterity, precision, and versatility at human scale, enabling the robot to perform difficult tasks in dangerous environments while keeping the operator safe and out of harm’s way.

This contract award follows a recent announcement with the U.S. Air Force for a contract to develop an artificial intelligence (AI) system that would enable robotic platforms, like the Guardian DX robot, to learn how to perform tasks with human-like movement through positive reinforcement and imitation machine learning (ML) technologies, known as Cybernetic Training for Autonomous Robots (CYTAR™). The CYTAR system furthers the Sarcos vision of robotic systems that augment rather than replace humans by reducing the system operator’s cognitive load for basic tasks, yet still relying on human intelligence, judgment, instincts, and reflexes to manage more complex tasks.

“The Navy is very focused on improving readiness rates,” said Steve McKee, Lead for the Naval Enterprise Sustainment Technologies Team (NESTT). “A key factor in achieving this objective is the deployment of new technologies that improve the turnaround time for maintenance activities, while also increasing the safety and effectiveness of our workforce. We are very excited to work with Sarcos Defense to productize the Guardian DX robot because it addresses a significant gap that the Navy has identified. Additionally, in my role as NESTT lead, I’ve had the opportunity to collaborate with my colleagues from the Marine Corps, Air Force, and Army regarding the Guardian DX robot, and it appears it can address a number of readiness and sustainment needs across the Department of Defense (DoD).”

“Similar to our teleoperated Guardian® GT robot for heavy, dexterous work, but designed at human scale, the Guardian DX robot can be teleoperated to perform intricate tasks that require human-like dexterity,” said Ben Wolff, chairman and CEO, Sarcos Robotics. “Examples of such tasks include the use of portable sensors for non-destructive structural testing and inspections, the use of portable power tools for grinding, cutting and welding at height, as well as lifting and manipulating heavy components weighing up to 200 lbs. Because the Guardian DX robot is kinematically equivalent to the upper body of humans, operators are able to manage the Guardian DX robot intuitively at typical human speeds by relying on their reflexes, instincts, and judgment to perform complex tasks in unstructured, often hazardous environments that historically have only been able to be completed by people directly.”

The Guardian XT commercial robot version is expected to begin shipping to industrial customers in late 2021.