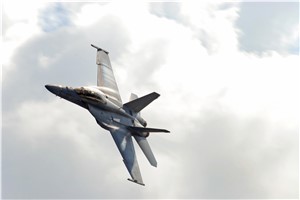 The State Department has made a determination approving a possible Foreign Military Sale to the Government of Finland of F/A-18E/F Super Hornet and EA-18G Growler aircraft and weapons and related equipment for an estimated cost of $14.7 billion.  The Defense Security Cooperation Agency delivered the required certification notifying Congress of this possible sale today.

This proposed sale will support the foreign policy and national security of the United States by improving the security of a trusted partner which is an important force for political stability and economic progress in Europe.  It is vital to the U.S. national interest to assist Finland in developing and maintaining a strong and ready self-defense capability.

The proposed sale of F/A-18E/Fs and EA-18Gs and associated weapons will provide Finland with a credible defense capability to deter aggression in the region and ensure interoperability with U.S. Forces.  The proposed sale will replace Finland's retiring F/A-18C/Ds and enhance its air-to-air and air-to-ground self-defense capability.  Finland will have no difficulty absorbing these aircraft into its armed forces.

The principal contractors will be The Boeing Company, St. Louis, MO; Northrop Grumman, Los Angeles, CA; Raytheon Company, El Segundo, CA; Raytheon Missile Systems Company, Tucson, AZ; General Electric, Lynn, MA; and Lockheed Martin, Troy, AL.  This proposal is being offered in the context of a competition.  If the proposal is accepted, it is expected that offset agreements will be required.  Any offset agreement will be defined in negotiations between the purchaser and the contractor(s).

Implementation of this proposed sale will require the assignment of six (6) additional U.S. contractor representatives to Finland on an intermittent basis for a duration of the life of the case to support delivery of the F/A-18E/F Super Hornet and EA-18G Growler aircraft and provide supply support management, inventory control, and equipment familiarization.