GE's T901 Engine Ahead of Schedule With CDR Complete 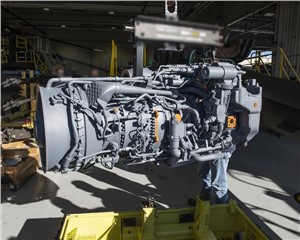 GE Aviation, in cooperation with the United States Army, successfully completed the Critical Design Review (CDR) in July for the T901-GE-900, GE’s next-generation engine that will power a large portion of the Army’s rotorcraft fleet for decades to come.

While these reviews would typically be conducted in person, due to the coronavirus pandemic all these reviews were conducted virtually. It is a tribute to the thorough preparation and collaboration with Army engineering that these reviews were successfully and seamlessly accomplished remotely. Completion of CDR allows GE Aviation to move ahead to its next critical milestone, First Engine To Test (FETT) for the XT901. FETT is scheduled to occur in 4QFY21.

GE Aviation continues to make strides to accelerate the program. It remains committed to the Army’s goal of accelerating the testing and delivery of the engine. A team of approximately 250 employees in Lynn, Massachusetts, and Cincinnati, Ohio, continue executing on the Engineering Manufacturing Development (EMD) phase of the T901 program.

“We are extremely happy with the teamwork demonstrated by GE T901 and US Army ITE teams in reaching this key program milestone,” said GE T901 Program Director Tom Champion.  “We have begun rig testing of T901 product configuration components and look forward to full engine testing next year.”

Earlier this year, GE Aviation and the Army successfully completed a T901 fit check of a Sikorsky UH-60M Black Hawk and a Boeing AH-64E Apache. According to Rich Crabtree, a member of the Army’s ITE AH-64E Integration team, the engine “fits like a glove… just like the T700.”

“We continue to monitor and assess risks daily, in conjunction with GE Aviation,” said Col. Roger Kuykendall, Army Aviation Turbine Engines Project Manager. "It is a true testament to GE and the government team on the work they have done to minimize delays and remain ahead of schedule.”

Tell a friend:
GE's T901 Engine Ahead of Schedule With CDR Complete