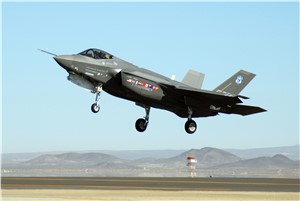 ­­­The State Department has made a determination approving a possible Foreign Military Sale to the Government of Switzerland of forty (40) F-35 Joint Strike Fighter aircraft and related equipment for an estimated cost of $6.58 billion.  The Defense Security Cooperation Agency delivered the required certification notifying Congress of this possible sale today.

This proposed sale will support the foreign policy and national security of the United States by helping to improve the security of a friendly European nation that continues to be an important force for political stability and economic progress in Europe.

The principal contractors will be Lockheed Martin Aeronautics Company, Fort Worth, TX; Pratt & Whitney Military Engines, East Hartford, CT; The Boeing Company, St. Charles, MO and Raytheon Missiles and Defense, Tucson, AZ.  This proposal is being offered in the context of a competition.  The purchaser typically requests offsets.  Any offset agreement will be defined in negotiations between the purchaser and the contractor.

Implementation of this proposed sale will require multiple trips to Switzerland involving U.S. Government and contractor representatives for technical reviews/support, program management and training over the life of the program. U.S. contractor representatives will be required in Switzerland to conduct Contractor Engineering Technical Services (CETS) and Autonomic Logistics and Global Support (ALGS).