First Launch from Australia to the Edge of Space 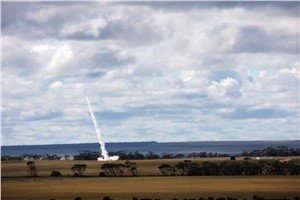 Air Force launched its first ever sub-orbital rocket from Australia to the edge of space on the weekend.

As part of its High Altitude Program, Air Force is exploring the delivery and employment of game-changing capabilities in the upper atmosphere.

The launch was the first to take place from the Southern Launch Koonibba Test Range, a new commercial rocket range in South Australia, and the rocket carried an Australian designed and made prototype miniature radio frequency receiver payload.

This launch will assess the design requirements of low-cost, expendable sensors necessary to survive and operate effectively in harsh temperature, gravity and vibration environments.

The Air Force payload was a 5.625GHz radio frequency receiver with a rudimentary machine-learning array designed to detect Bureau of Meteorology’s weather radars.

“The rocket is unlike any ever launched in Australia weighing only 34kg, it travelled at Mach 5, or about 1.5km per second, reaching an altitude of 85km,” Wing Commander Hay said.

“The activity successfully demonstrated DEWC Systems’ ability to miniaturise a very low cost passive sensor and communication system, integrate the sensor data into the RAAF network, develop payload software, and collaborate with Southern Launch to integrate the payload into the unique T-Minus rocket. The learnings from the trial will be important for the next steps in Australia's commercial space operations as well as Air Force’s High Altitude Program.

“The DART rocket payload enables Air Force to continue low-cost trials to assess the design requirements necessary for low cost, expendable sensors to survive and operate effectively in harsh environments and how to share that information across Defence networks.

“As multiple data sources are provided by advanced sensors will be integrated into a sophisticated Combat Cloud – or internet of Defence things - to enable smart, timely decision making.”

“The launch of the DEWC Systems payload at the Koonibba Test Range, supported by the First Nations people at Koonibba, marks the start of Australia entering the new space race and a future where all Australians can truly reach for the stars,” Southern Launch CEO Lloyd Damp said.

The launch from the Koonibba Test Range was done in consultation and cooperation with the local Aboriginal community and marks the start of commercial space launches from South Australia.

Tell a friend:
First Launch from Australia to the Edge of Space