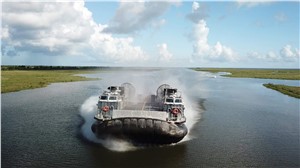 Prior to this milestone, Craft 100 and LCAC 101 completed Builder’s and Acceptance Trials, followed by formal acceptance by the U.S. Navy customer. Craft 100 is intended to serve as a test and training asset for the customer, while LCAC 101 is the first craft for operational use. Currently, twelve additional SSCs are in progress at Textron Systems’ shipyard.

“We are proud of the achievement that this fly-away represents as we strive to equip the U.S. Navy and Marine Corps with the unmatched capability set of the SSC,” said Senior Vice President Henry Finneral of Textron Systems. “The SSC will provide the versatility needed to transport critical personnel, weapon systems, equipment and cargo the last mile, even in the most challenging environments.”

The SSC stands ready to replace the existing legacy fleet as a true upgrade for the LCAC forces at Assault Craft Unit (ACU) 4, ACU 5 and Naval Beach Unit 7. The craft can travel at a sustained 35 knots and has an increased payload capacity and a service life of 30 years. SSC’s similar configurations, dimensions and clearances to the legacy LCAC make it compatible with existing well deck-equipped amphibious ships, as well as Expeditionary Transfer Dock and Expeditionary Sea Bases. The SSC’s expanded capability set, versatility and built-in compatibility promise a smooth transition for users.